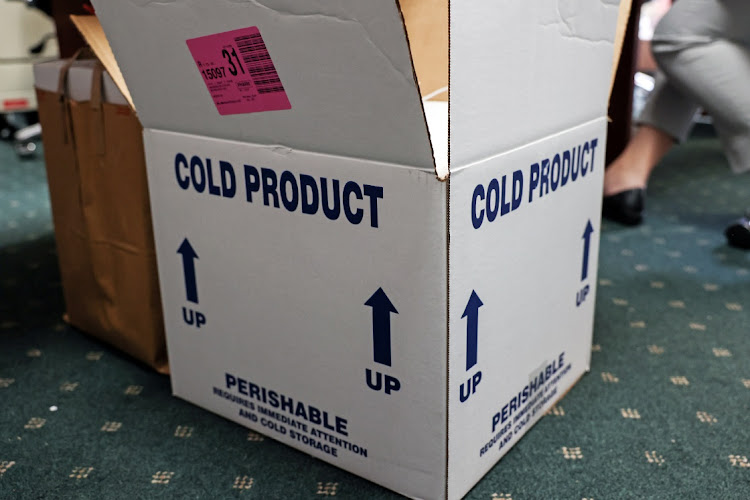 A box of the Pfizer-BioNTech coronavirus disease (Covid-19) vaccine is seen at Crown Heights Center for Nursing and Rehabilitation, a nursing home facility in Brooklyn, New York, US, December 22, 2020.
Image: REUTERS/Yuki Iwamura

As 2020 closes, regulatory approval of Covid-19 vaccines has raised hopes the world can defeat the pandemic next year. But production and delivery challenges suggest beating the disease will be a marathon whose finish line is still far away.

Europe on Monday followed Britain and the US in giving a green light to a Covid-19 vaccine from Pfizer and its partner Biotech which, like a similar shot from Moderna that has US emergency approval, demonstrated 95% efficacy in large trials.

The rapid approval of vaccines, just a year after the new coronavirus was detected in Wuhan, China, is testament to the huge global effort made to tackle a pandemic that has killed over 1.7 million people, battered economies and upended life.

Scientists identified promising candidates after just weeks, not the years normally needed, and millions of doses are already rolling out of factories.

The progress comes, however, as many countries endure a bleak winter, with infections surging, a new fast-spreading variant of the virus in Britain and countries worldwide imposing new restrictions on travel and everyday life.

A third vaccine from AstraZeneca and Oxford University has also been shown to prevent COVID-19, though questions over the level of its efficacy have left them with more work to do to win over some regulators.

Still, the progress has been breathtaking.

“It's unprecedented that you have three potential vaccines developed in a short period that are all promising,” said Marcel Tanner, president of the Swiss Academies of Arts and Sciences and a Swiss Covid-19 Science Task Force member.

Inoculations have begun in Britain and the US, with shipments also going to Canada, Israel and Mexico. EU countries have said shots will start days after Christmas, while Switzerland and Qatar authorised Pfizer/BioNTech's vaccine at the weekend.

The national health department and the Solidarity Fund confirmed on Tuesday that a down payment of R283m had been made to secure SA’s entry to the ...
News
1 year ago

Even so, BioNTech CEO Ugur Sahin predicted on Tuesday the “new normal” would see society dealing with sporadic Covid-19 outbreaks for the next decade, with multiple vaccines helping to avoid business shutdowns and overloaded hospitals.

More than 100 other vaccine candidates are in the works, with trial data on several expected soon.

Vaccine experts say multiple shots will be needed to provide enough doses to inoculate the world, from rich to poor.

The International Federation of Pharmaceutical Manufacturers and Associations expects up to 10 vaccines to have won approval by mid-2021, including from US companies Johnson & Johnson and Novavax and Germany's CureVac.

Yet huge challenges remain, including ramping up production.

Pfizer expects to produce just 50 million shots for 2020, half its original goal, covering 25 million people with its two-dose regimen. Moderna has pledged 20 million US inoculations this year, covering 10 million people.

Other companies' trajectories are similar, but supplies won't come fast enough for a world hungry for vaccines.

“There just aren't going to be enough vaccines to go about for a long time ... maybe well into 2022,” said Tom Frieden, former director of the US Centers for Disease Control and Prevention (CDC).

There have also been early hiccups related to storing and delivering Pfizer/BioNTech's vaccine that must be kept at Antarctic temperatures, as well as confusion over how many doses are actually in a vial.

Allergic reactions in some UK and US health care workers have also emerged.

And though trials involving tens of thousands have shown the new mRNA technology used by Pfizer/BioNTech and Moderna appears safe, there is still plenty of hesitancy among people over actually getting shots when their number is called.

The World Health Organisation (WHO) estimates about 60% of people need to get vaccinated to achieve herd immunity, meaning enough people are protected for the disease to stop spreading.

Developing countries hoping to access vaccines via a global WHO-backed scheme may have to wait, as wealthier countries have reserved initial stocks.

So far, the West is focused largely on inoculating front-line medical workers and older nursing home residents, where even in limited volumes vaccines could make a difference for populations hardest hit by the virus.

“This might take care of the Covid-19 health care crisis even if, due to vaccine scepticism, no herd immunity is reached,” said Christian Muenz, University of Zurich professor of viral immunobiology.

So far, Russia has inoculated 200,000-plus people with its home-grown Sputnik-V shot, whose developers say it is 91.4% effective. The country has also signed production deals, including with India.

In China, where one Sinovac Biotech candidate and two from China National Pharmaceutical Group (Sinopharm) are in late-stage trials, health workers and border official have got shots, amid spending to boost production.

Sinopharm's vaccine is registered in Bahrain and the United Arab Emirates, with Egypt also getting deliveries, while Sinovac has deals to supply Brazil, Turkey and Indonesia.

Other Chinese vaccines, including from Cansino Biologics, are also in late-stage trials.

However, not all vaccine projects hit the bullseye.

Sanofi and GlaxoSmithKline delayed their candidate after it failed to protect older people.

And questions still surround AstraZeneca's vaccine, whose efficacy was 62% among patients who received two full doses.

Even as high profile figures like U.S. Vice President Mike Pence rolled up their sleeves for Covid-19 vaccinations, patients already ill with the ...
News
1 year ago

Prime minister Boris Johnson has imposed an effective lockdown on almost 18 mIllion people in England and reversed plans to ease curbs over ...
News
1 year ago
Next Article