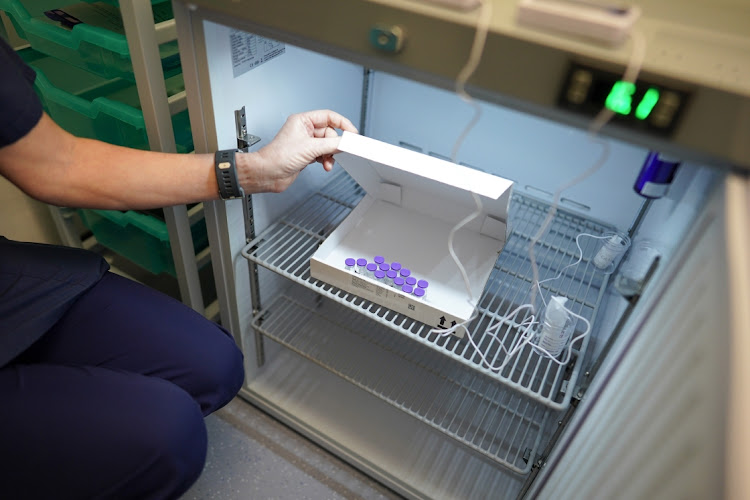 Germany's CureVac said it does not expect the variant to affect the efficacy of its experimental shot, which is based on the same messenger RNA (mRNA) technology used by Pfizer-BioNTech.
Image: Ian Forsyth/Getty Images

Drug makers including BioNTech and Moderna are scrambling to test their COVID-19 vaccines against the new fast-spreading variant of the virus that is raging in Britain, the latest challenge in the breakneck race to curb the pandemic.

Ugur Sahin, chief executive of Germany's BioNTech , which with partner Pfizer took less than a year to get a vaccine approved, said on Tuesday he needs another two weeks to know if his shot can stop the mutant variant of the virus.

Moderna expects immunity from its vaccine to protect against the variant and is performing more tests in coming weeks to confirm, the company said in a statement to CNN. Moderna did not immediately respond to Reuters' requests for comment.

The mutation known as the B.1.1.7 lineage may be up to 70% more infectious and more of a concern for children. It has sown chaos in Britain, prompting a wave of travel bans that are disrupting trade with Europe and threatening to further isolate the island country.

Sahin said there are nine mutations on the virus.

While he does not believe any are significant enough to skirt the protection afforded by BioNTech's mRNA vaccine, which was approved by the European Union on Monday, he said another 14 days or so of study and data collection are needed before offering a definitive answer.

"Scientifically it is highly likely that the immune response by this vaccine can also deal with this virus variant," he said on a call with reporters.

"The vaccine contains more than 1,270 amino acids, and only 9 of them are changed (in the mutant virus). That means that 99% of the protein is still the same."

Germany's CureVac said it does not expect the variant to affect the efficacy of its experimental shot, which is based on the same messenger RNA (mRNA) technology used by Pfizer-BioNTech.

It started late stage clinical trials on its vaccine candidate last week and is constantly reviewing variants, which the company said are common as viruses spread.

Even though there are multiple mutations, BioNTech's Sahin said, most of the sites on the virus that are recognised by the body's T-cell response are unchanged, and multiple antibody binding sites are also conserved.

In the event that the variant presents vaccine developers with an unexpected challenge, an advantage of mRNA is that scientists can quickly re-engineer genetic material in the shot to match that of the mutated protein, whereas modifying traditional vaccines would require extra steps.

"In principle, the beauty of the mRNA technology is we can directly start to engineer a vaccine which completely mimics this new mutation," Sahin said.

"We could be able to provide a new vaccine technically within six weeks. Of course, this is not only a technical question. We have to deal with how regulators... would see that."

Britain's chief scientific adviser Patrick Vallance said on Saturday vaccines appeared to be adequate in generating an immune response to the variant of the coronavirus.

The World Health Organization (WHO) said on Tuesday it will convene a meeting of members to discuss strategies to counter the mutation.