Texas woman mauled to death outside her workplace by feral hogs 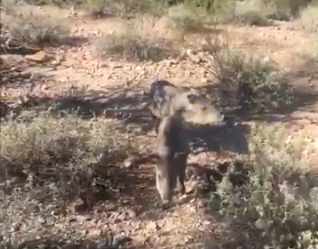 The death of 59-year-old Christen Marie Rollins has been described by authorities as one of the worst cases they have ever seen, after she was mauled to death by feral hogs.

Rollins was a health care worker and looked after an elderly couple in Anahuac, Texas. Her lifeless body was discovered by the 84-year-old she worked for outside the house on Sunday morning, after she failed to show up on time for her shift, CNN reports.

According to The Guardian, Sheriff Brian Hawthorne described the incident as one of the most shocking and tragic he had ever seen.

Two-and-a-half-year-old toddler Courtney Ntimane, who was mauled to death by a leopard in the Kruger National Park this week, will be buried on ...
News
2 years ago

He confirmed that various animals were involved in the attack, citing varying sizes in the bites. “This is unbelievably tragic, and very rare. In my 35 years, I will tell you, it's one of the worst things I've ever seen.”

The sheriff said that authorities had received numerous complaints from concerned neighbours, and said they had laid traps for the animals.

Hawthorne added that from the research available to them, less than six such attacks had been reported in the entire country, said BBC.

The hogs can weigh 45kg-180kg and their population in Texas has increased to 1.5 million.

A three-year-old toddler was mauled to death by dogs on Saturday evening near Mokopane in Limpopo.
News
2 years ago

Two pitbull dogs mauled a five-year-old child do death in the resort town of White River in Mpumamanga on Tuesday.
News
2 years ago
Next Article