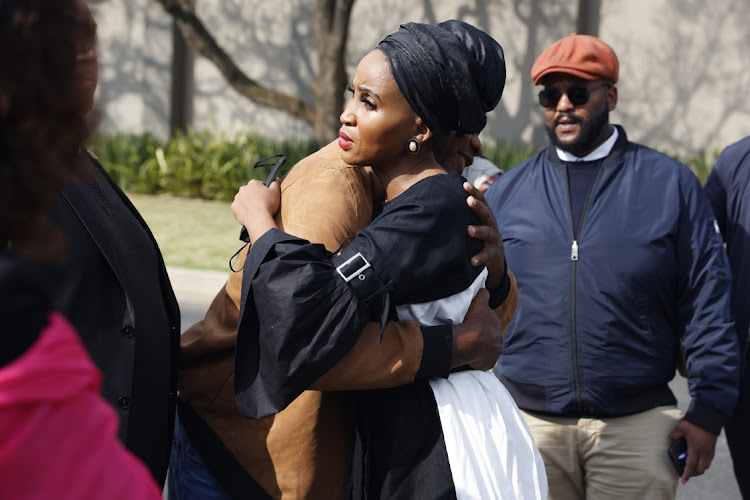 Joburg mayor Mpho Phalatse and council speaker Vasco Da Gama during a visit to the home of former mayor Mpho Moerane to pass their condolences to the family. Moerane succumbed to his wounds on Wednesday after being involved in a car accident last week.
Image: Thulani Mbele

Johannesburg mayor Mpho Phalatse said she has heard of fears that she will be next after the successive deaths of her three predecessors.

Speaking at the funeral of her predecessor Mpho Moerane, who died on Wednesday of injuries sustained in a car accident, Phalatse said if statistics were anything to go by, there were fears she could be the next mayor to die.

But she added, to audible gasps from the mourners, she did not plan to die prematurely.

In under a year, the city has lost three mayors — two of whom perished in car accidents.

Geoff Makhubo died from Covid-19 complications in July last year, soon after his election and his successor, Jolidee Matongo died in a car accident in September.

Moerane, who was mayor between October and November, died this week after being involved in a car accident last week.

Phalatse said the deaths of the mayors were scary and that those who know statistics would suggest she was next.

However, she said, “I would like to encourage everyone, that I will not die prematurely”.

Daughter Kutlwano said she has lost her partner in crime, her karaoke buddy and her biggest cheerleader.
News
1 month ago

Phalatse said she trusted that God will protect her.

She said she was warned “strongly” not to entertain this kind of thinking.

Gauteng premier David Makhura said the successive deaths were “unprecedented” and that nothing could have prepared the ANC to lose three of its mayors in a short space of ten months.

These fears have also found resonance in the ANC in the city and the province with many asking who is next.

This, as the ANC in the Johannesburg region gears towards its elective conference next weekend to choose who will lead the party in the city.

Among those elected would be a regional chairperson who, as tradition dictates, would be elected mayor should the ANC wrestle the power back from the DA-led coalition in the metropolitan municipality.

Moerane was expected to stand as a candidate for the chair position at the conference.

His slate will now have to pick another candidate to stand as chair.