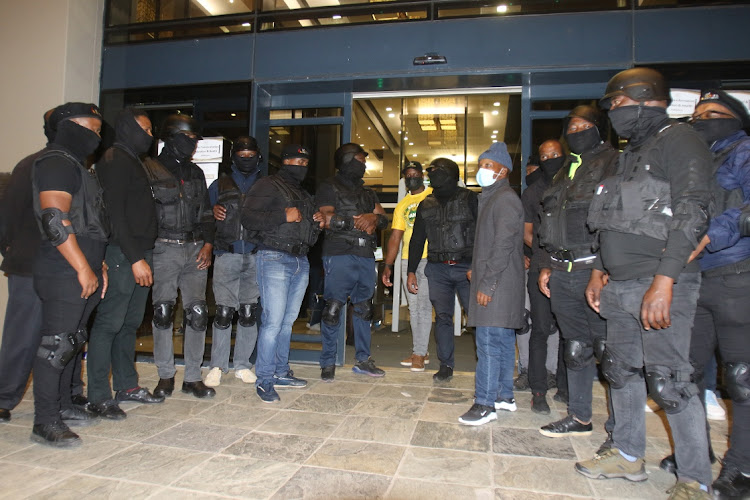 Security was beefed up ahead of voting for new leadership at the ANC Conference in East London.
Image: Michael Pinyana

Police Nyalas and vans stationed at the main gate of the East London International Convention Centre and heavily armed officers at every door of the conference venue.

These were the scenes of the ANC Eastern Cape conference on Sunday night as tensions rose between the two opposing factions.

On the second day of proceedings, disputes over the credibility of the process and which delegates were rightfully in the venue took centre stage before an eagerly anticipated leadership election.

The three-day conference, which began on a jovial note, reached a stalemate on Sunday as groups supporting former provincial chair Oscar Mabuyane and his opponent, Babalo Madikizela, accused each other of trying to collapse the proceedings.

Shortly after police reinforcements were brought in a poster emerged on social media, purportedly from Madikizela’s camp, which read: “They have planted security personnel inside the conference venue  for purposes of intimidating you. Do not be intimidated by these unwarranted attacks. The ANC belongs to you.”

On Sunday afternoon, the elective conference came to a standstill as members again questioned the credentials of a delegation from the Dr WB Rubusana region.

Some disgruntled members from the region believe there were irregularities in branch general meetings in the lead-up to the conference.

An urgent application launched at the East London high court on Saturday evening to prevent the branches from participating in the conference was dismissed.

The disgruntled group who are aligned to Madikizela, who is also contesting the position of chair, believes the branches under dispute should not be allowed to participate in the conference.

However, the provincial leaders as well as the credentials steering committee chaired by national executive committee member Aaron Motsoaledi decided those votes should be quarantined.

It was the suppression of former ANC Youth League deputy president Andile Lungisa from speaking in plenary that caused the conference to descend into chaos.

Hundreds of branch delegates aligned to Madikizela broke into song when Lungisa was prevented from speaking.

“Andile was standing for 30 minutes and they wouldn’t allow him to speak. This thing is co-ordinated by Mvoko and [provincial co-ordinator Lulama] Ngcukayitobi. He’s the one collapsing this meeting,” they said.

Lungisa is contesting the position of provincial treasurer on Madikizela’s slate.

Speaking on his conviction being raised as an issue, an irritable Lungisa said his matter had been cleared by the  national leadership.

“Anyone who wishes to see me gone or is irritated by my face, they should go to the national conference and remove me that way,” he said.

Plenary was eventually adjourned for delegates to “calm down”, according to provincial task kteam  member Stella Ndabeni-Abrahams.

Ndabeni- Abrahams said there was an attempt to collapse the conference over the adoption of credentials.

“When we started this process, we started hearing singing from members and they started raising issues, including the one from court yesterday.

“The convener of the NEC deployees Dr Motsoaledi tried to step in but unfortunately the delegates could not listen to start.

“The singing grouping was that supporting comrade Babalo Madikizela. To protect the integrity of the conference we adjourned to allow comrades to calm down.”

Aside from the chaos from plenary, lobby groups were seemingly worried about the conference outcomes should voting get underway.

Earlier in the day Lungisa held a gathering with a group of regional leaders crunching the numbers outside the venue.

The group could be heard talking about the votes they needed to beat Mabuyane.

Prior to Mlibo Qoboshiyane abandoning his campaign to be chair on Saturday evening those aligned to Madikizela were concerned about their numbers.

One source said prior to Qoboshiyane joining their group: “We were under. How could we answer our phones when things weren’t looking good?”

During one of Sunday’s lunch breaks, Madikizela huddled in meetings with secretaries from regions supporting him.

At some point, he drove out with former PEC member Thabo Matiwane followed by Amathole regional secretary Terris Ntutu.

Meanwhile, Mabuyane’s faction has consistently pushed for credentials to be adopted, a sign it was confident about its numbers.

Both Madikizela and Mabuyane have thrown their weight Cyril Ramaphosa to run for a second term.

While Mabuyane is a strong ally of Ramaphosa- Madikizela was previously linked to ANC presidential hopeful Zweli Mkhize in 2017.

However, Madikizela poured cold water on claims that he supported Mkhize.

There is no faction bigger than the ANC. These were Gwede Mantashe's partying words at the ANC Eastern Cape conference.
News
1 week ago

Oscar Mabuyane who is hoping to get a second term as Eastern Cape chairperson, said Ramaphosa was the only leader who had shown willingness to renew ...
News
1 week ago