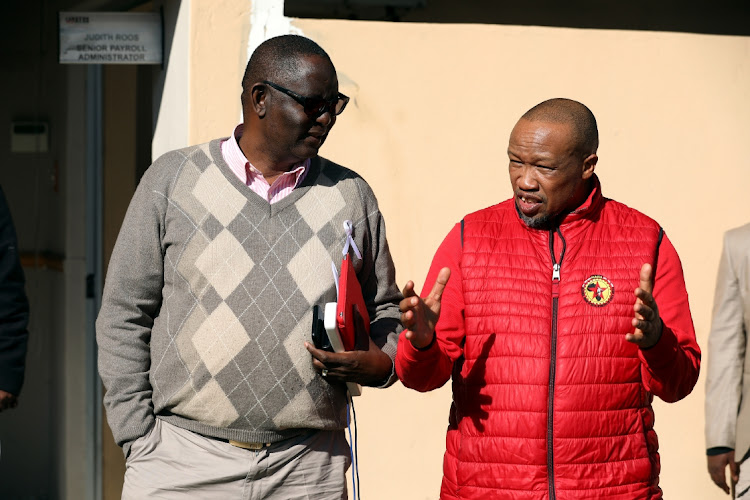 Saftu general secretary Zwelinzima Vavi and Numsa general secretary Irvin Jim were central to the establishment of Saftu as an alternative to Cosatu after a political battle within the ANC-aligned federation that saw Numsa expelled for refusing to continue backing the ruling party. File photo.
Image: SANDILE NDLOVU

The SA Federation of Trade Unions (Saftu) on Saturday confirmed it had suspended four of its national office bearers .

The trade union said in a statement it would hold a media briefing on Sunday at the Birchwood Hotel in Boksburg to communicate decisions made during its national executive committee (NEC) meeting held on Saturday.

“The motion passed with 28 votes versus two and 11 abstained. Numsa did not vote because they are not in good standing,” said the source.

The Sunday Times reported that a bitter falling out between erstwhile labour allies Zwelinzima Vavi and Irvin Jim appeared to be the cause of the ructions in the five-year-old Saftu last week.

After Saftu general secretary Zwelinzima Vavi confirmed there was a “big fallout” between him and Numsa counterpart Irvin Jim, TimesLIVE spoke to the ...
News
5 months ago

Vavi, who is general secretary of the federation, told the Sunday Times that Jim — head of the National Union of Metalworkers of SA (Numsa) — was behind the “trumped-up charges” that his Saftu colleagues have cited as reasons to suspend him.

Vavi, former general secretary of the Cosatu trade union federation, said his relationship with Jim soured after the Saftu leadership rejected his plea to endorse the Socialist Revolutionary Workers’ Party (SRWP), which was launched by Numsa to contest the 2019 elections. Numsa is a Saftu affiliate.

Jim and Vavi were close allies at Cosatu before they were both expelled in 2015, after which Saftu was launched. Before his departure from Cosatu, Vavi was accused of, among other things, having used a union credit card to pay for flights for his wife and ex-wife.

The divisions between Vavi and Jim were laid bare last week when messages exchanged in a WhatsApp group were leaked.

The ANC factions have affected trade union federation Saftu and divided it down the middle as the turmoil relating to Zwelinzima Vavi rages on.
News
5 months ago
Next Article