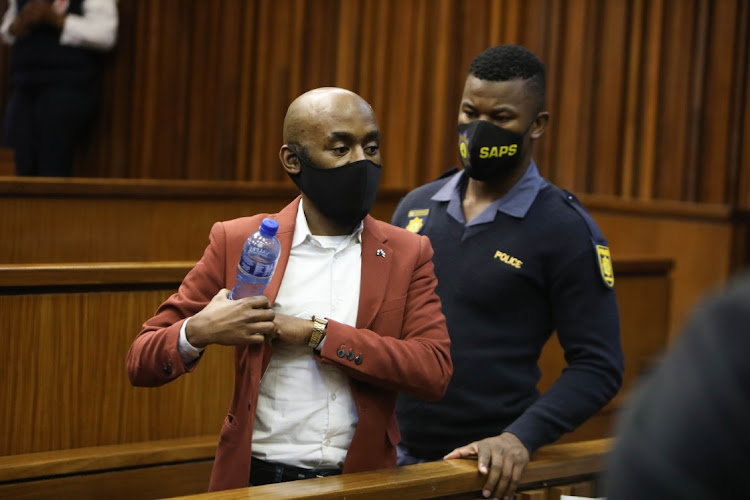 Ntuthuko Shoba in the dock at the Johannesburg high court. He is accused of ordering a hit on his pregnant on-and-off again girlfriend.
Image: Alaister Russell/Sunday Times

Murdered Tshegofatso Pule’s on-again, off-again boyfriend Ntuthuko Shoba has discounted all the evidence presented by the state’s star witness in court this week.

Self-confessed murderer Muzikayise Malephane told the court Shoba had promised him R70,000 in exchange for him killing Pule, his mistress who was eight months pregnant with Shoba’s child.

It was Malephane’s testimony that Shoba had wanted Pule killed to conceal the pregnancy from his wife. Shoba was reportedly afraid of losing his wife and an R8m trust fund payout that his wife had recently received.

During cross-examination of Malephane, Shoba’s legal representative Norman Makhubela said his client “does not have a wife, never had a wife at the time, and simply had a fiancée.

“The accused denies knowing anything about a trust fund, asking what would have been the source of the trust fund,” he said.

Malephane replied: “I disagree. He told me about the trust fund and even told me the exact amount. It was because of the trust fund that I trusted he would pay me.”

Muzikayise Malephane is the key state witness in the murder trial of Ntuthuko Shoba, who is accused of orchestrating the hit.
News
3 months ago

He said whenever Shoba made reference to the woman in his life, he made it seem like he was speaking about his wife.

Malephane was convicted of Pule’s murder in February 2021 after he confessed to shooting her and then hanging her body from a tree in Durban Deep, Roodepoort.

Shoba, however, has pleaded not guilty to murder and conspiracy to commit murder charges and another of defeating the ends of justice.

It is Malephane’s version that Shoba had come to his house in Goudrand, Roodepoort, on June 4 2020 to inform him that he wanted Pule to be killed that evening, as they had planned several weeks earlier.

Malephane said the plan involved him pretending to be an Uber driver, picking up Pule up from Shoba’s Florida home under the guise of taking her home to Meadowlands, and then proceeding to the Maraisburg bridge, where he was to hang her and stage her death as a suicide.

The plan, he claimed, changed when he became afraid of hanging her alive and instead shot her before taking her to the Durban Deep veld where she was found.

While Shoba, through his lawyer, admitted to seeing Malephane that day, he claimed it was to buy cigarettes as he was known as a supplier during the hard lockdown when alcohol and cigarettes were banned.

CCTV footage from Shoba’s apartment complex showed him walking Pule to Malephane’s silver-grey Jeep on the evening when she was killed, but Shoba claimed he did not recognise the car and was unaware it was Malephane driving.

Tshegofatso Pule's murderer has been grilled on why he had wanted to harm the alleged mastermind, including organising for him to be raped by prison ...
News
3 months ago

He claimed Pule had left his house annoyed that a woman referred to as Rosetta, who other witnesses have referred to as Shoba’s other girlfriend, kept calling while they were together at Shoba’s Roodepoort home. Shoba said Pule had made a call to organise her own ride home.

Malephane was arrested for the murder just days after Pule’s body was found.

The convicted killer told the court that when he was arrested in Hillbrow in June 2020, he had been on his way to police to hand himself over. The police, however, were under the impression he was fleeing as luggage was found in the car.

“I was going to hand myself over to the police. I was returning from Mpumalanga. I had already told my girlfriend about this,” said Malephane.

He claimed he went to Mpumalanga because he was “scared” after killing Pule.

“I was following what was happening on social media,” said Malephane, who said he was traumatised.

Asked how he told his girlfriend about his involvement in Pule’s murder, Malephane replied: “She showed me her story on her phone and after an hour I told her I am involved in the matter but did not go into details.”