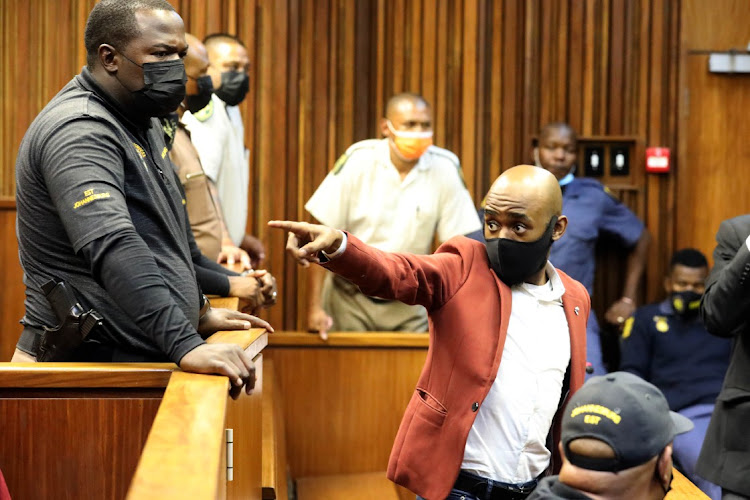 Murder accused Ntuthuko Shoba points a finger at the court gallery during his appearance in the high court in Johannesburg over his lover Tshegofatso Pule’s killing.
Image: Antonio Muchave

The credibility of Tshegofatso Pule’s murderer came under scrutiny on Wednesday when the defence asked him why he had not disclosed to police that the alleged mastermind had received an R8m payout.

Muzikayise Malephane's evidence on Wednesday came into question, with Ntuthuko Shoba's lawyer Norman Makhubela, who also disputed Malephane’s evidence that he had met with his client in Meadowlands, Soweto, two days after killing Pule where he allegedly assured him that he was still putting the money together.

“So he started putting the money together when the task was done? Is that what you want the court to believe,” he asked.

Shoba is accused of masterminding Pule's murder who was eight months pregnant with his child in June 2020.

The court also heard that the Soweto meeting was also not planned as the two bumped into each other, where Shoba gave Malephane R20 which he was running short of to complete a purchase at a hardware store.

Malephane said he had been waiting for the dust to settle and for Pule’s funeral to pass “before I ask for my money”.

Tshegofatso Pule's murderer has been grilled on why he had wanted to harm the alleged mastermind, including organising for him to be raped by prison ...
News
3 months ago

He admitted when grilled by Makhubela that he had never reached an agreement with Shoba on when and how the money would be paid, but that he was not bothered by this as he knew he would be paid.

Malephane told the court that he knew this because Shoba was scared of him and had told him that he did have the money as part of the reason he had wanted Pule killed was to ensure that he did not lose “R8m Trust Fund payout” that belonged to him and his partner.

Makhubela, however, questioned why Malephane had never spoken about the payout before. He said Shoba could not be reached on his phone.

Malephane told the court that the investigating officer of the murder trial was aware of the payout, but said he was not probed further hence he did not give details.

He was also grilled on why he had wanted to harm the alleged mastermind, including organising for him to be raped by prison gangs if he was imprisoned.

Malephane said he had been angry at Shoba as he had got him into trouble and disappeared and that he had wanted to “injure” him.

“Shoba had put me into too many problems and he does not even have the guts to stand up for what he has done or take responsibility for his role. To be honest, I was going to injure him and he was going to be a hospital case,” he told the court.

His response resulted in many laughing in the court gallery.

Makhubela told the court that Malephane's remarks displayed him as someone who was prone to violence.

A visibly frustrated Malephane, playing with a pen as he answered questions from the witness stand, said: “If it was not for Shoba, I would not be sitting here on Thursday.”

This also came after Malephane admitted that he had, through a leaked group chat he was in while in prison, threatened to organise 26 and 28 prison gangs to rape Shoba when he gets to prison for what he had done to him.

“I was just chatting on the group chat, and I had not arranged such,” he said.

This triggered laughter from the gallery once more, resulting in acting judge Stuart Wilson threatening to throw people out of the courtroom.

Makhubela is expected to cross-examine Malephane on his allegations regarding the night in which he killed Pule.

Tshegofatso Pule’s convicted killer Muzikayise Malephane was on Wednesday grilled before the South Gauteng High Court in Johannesburg on why he had ...
News
3 months ago

Court hears how Pule's lover hatched plan to kill her

June 4 2020 was D-Day for heavily pregnant Tshegofatso Pule; on this day she had to die.
News
3 months ago

"It was being greedy and just the love of money."
News
3 months ago
Next Article