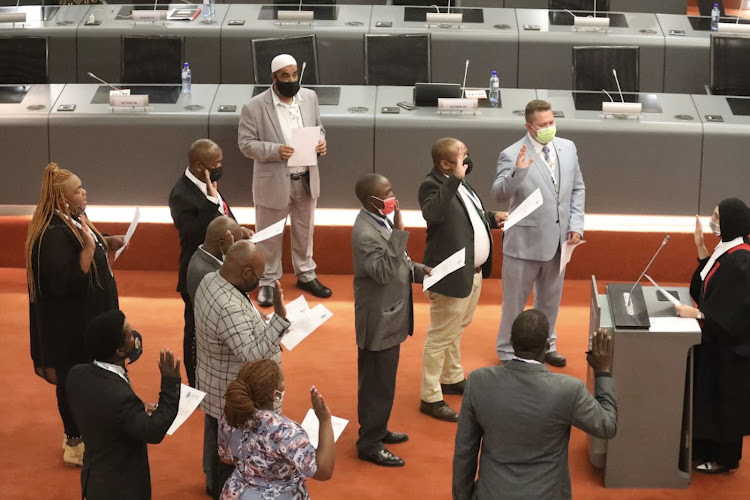 Swearing in of new councillors during the inaugral council meeting of the City of Ekurhuleni .
Image: Antonio Muchave

The DA’s mayoral candidate in Ekurhuleni Refiloe Nt’sekhe has withdrawn as a councillor candidate in the metro.

This was revealed by the DA during the inaugural council meeting held in Germiston on Monday. The party, however, did not provide reasons for Nt’sekhe’s withdrawal.

Nt’sekhe was the only councillor candidate that was absent during the marking of the attendance register.

Despite the party informing municipal manager Imogen Mashazi of the withdrawal, she insisted that official communication be sent to her office as Nt’sekhe’s name had been published by the Independent Electoral Commission (IEC).

Councillors being sworn in during the inaugural Ekurhuleni council meeting in Germiston.

The council sitting on Monday is expected to elect the speaker, chief whip of council and mayor for the country’s manufacturing hub.

Over the weekend, the ANC announced Mzwandile Masina as its candidate to become mayor in Ekurhuleni.

Swearing-in of councillors has just started. There are 224 seats in this council made up of 112 ward councillors and 112 proportional representation (PR) councillors.

"I am sure South Africans have seen how he worked hard in Johannesburg. He batted very well," says UDM leader Bantu Holomisa of ActionSA's Herman ...
News
6 days ago

Action SA leader Herman Mashaba yesterday hit out at the DA for labelling him an EFF lackey, a central claim behind its refusal to back him for mayor ...
News
6 days ago

The ANC will nominate Mpho Moerane as its mayoral candidate for Johannesburg, the party said on Sunday evening.
News
6 days ago
Next Article