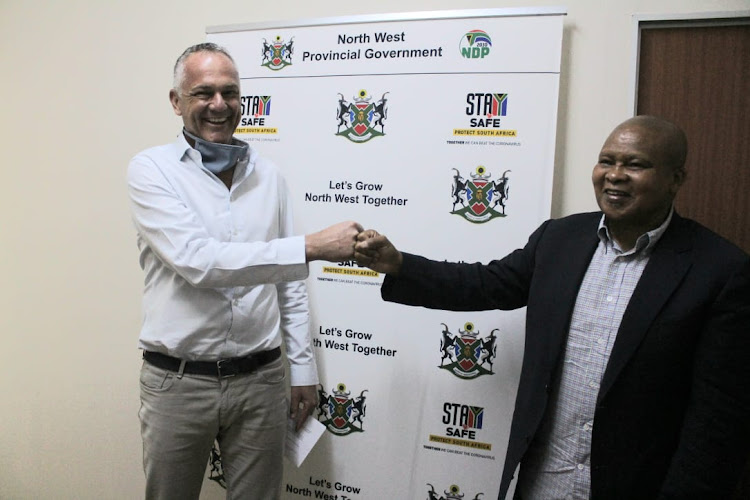 Newly appointed North West premier Bushy Maape has committed to improving service delivery and creating a better environment for businesses to operate in his province.

On Wednesday, Maape, together with deputy Cogta minister Obed Bapela, met the management of Supreme Poultry after media reports that the company was intending to close its operations in the province’s capital,  Mahikeng.

Supreme Poultry supplies restaurants including KFC, Nandos and Steers, and most retailers, with chicken products.

Maape’s office said that during their stakeholder engagement, the executive management of the company confirmed that the allegations of their withdrawal were not true.

According to Maape’s office, during the engagements Brendon de Boer, CEO of Country Bird Holdings, which is the holding company for Supreme Poultry, raised concerns over water interruptions and the effect of electricity outages as a result of load-shedding.

He said operations had been disrupted by protests by the community and led to intermittent disruptions to production. He stated that the company was seeking effective law-enforcement to ensure continuity of operations.

Maape’s office said he has since established an interdepartmental war room that will on a continuous basis monitor challenges of service delivery and attend to them promptly. This includes the development of an accelerated service-delivery plan for the province.

“Supreme has invested significantly in the North West and with the support of the government would like to maintain this investment and where possible look at further investment. The ability to do so would be dependent on an effective working relationship with the government and all Supreme’s stakeholders.

“Today’s engagement has gone a long way towards strengthening our relationship with government, and we look forward to building on this into the future”, De Boer said.

Maape said the role of government was to create a conducive environment in which business is able to thrive. Critically, the government will on a continuous basis hold stakeholder engagements with the company to ensure that any outstanding issues are resolved. Since his election, the premier has been criss-crossing the province meeting various stakeholders in an effort to build investor confidence and to establish working relationships with all sectors of society.

“We have to be a responsive government and if there is an issue that warrants our attention we will definitely intervene and resolve it. Covid-19 has had serious financial implications for the country and we need to preserve the jobs we have while working on luring investments to the province. This will help us fight the scourge of unemployment and poverty plaguing our communities,” Maape said.

In June, Clover announced that it would close its cheese factory in Lichtenburg, North West. It cited poor service delivery as a reason to move its operations from the province to Queensburgh in KwaZulu-Natal.

A fifth outbreak of avian influenza has been announced by the agriculture, land reform and rural development department — on a commercial chicken ...
News
8 months ago

Another East Rand poultry farm has been hit by avian influenza, the SA Poultry Association said.
News
8 months ago
Next Article