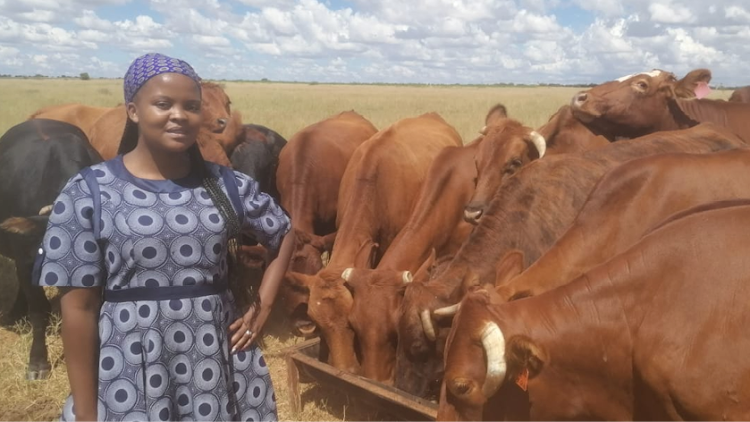 Refilwe Manuel runs a mixed farming business thanks to the support she received from the Sire Subsidy Scheme.
Image: Supplied.

Refilwe Manuel (26) grew up in a family of farmers. She was inspired to start farming at age 13 when her parents bought her broiler chickens.

Manuel realised from an early age that people need agricultural supplies if they are to eat three meals a day.

She knew that this meant that she would never be out of work if she became a farmer.

She also took agriculture as a subject in high school and furthered her studies in primary agriculture after completing matric.

“In 2016, I attended the AVI Africa Conference, which is the biggest poultry conference and exhibition in Africa showcasing agricultural products. The conference gave me faith and added to my positivity,” she says.

As a child she was interested in being hands on in the family business. This lead Manuel start her own business in her teens."This came with a lot of challenges because of my age, as I could not get funding and support to grow my business. But I never stopped,” she says.

Her business specialises in various livestock.

She has also partnered with her husband who specialises in crop farming.

Manuel sells her agricultural outputs to people across the North West province and at auctions.

In 2019, she received goats from the Department of Agriculture, Land Reform and Rural Development and was also among the young female farmers who received bulls as part of the department’s Sire Subsidy Scheme.

Farmers who benefit from the programme must;

Have a business focus;

Have an understanding of and passion for large stock production;

Operate in some form of acceptable space, such as a farm or a communal area.

For more information about the Sire Subsidy Scheme, contact the Farmer Support Unit at 018 389 5111.

Given Ngwamba, 35, from Naas in Mpumalanga, did not think he would struggle to find employment after completing his sound engineering diploma at the ...
SebenzaLIVE
1 month ago

WATCH | As simple as a doll that looks like you