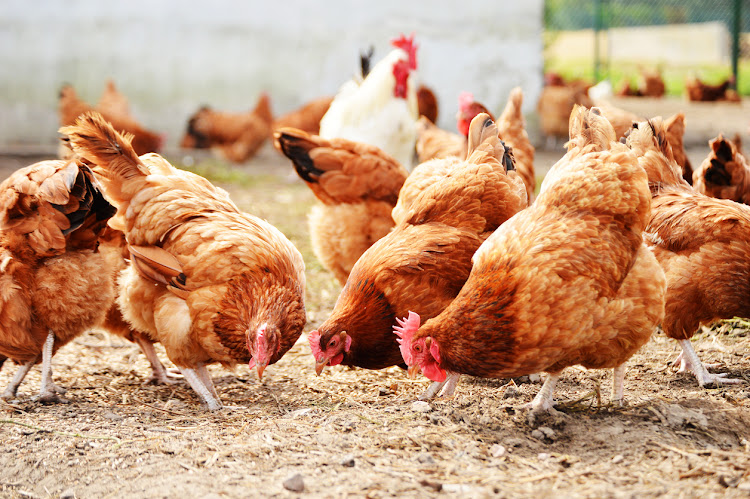 Chickens on traditional free range poultry farm. A broiler breeder farm in Worcester, Western Cape, last week was the latest to detect the virus, after five other farms in Gauteng and the North West were infected.
Image: Gallo Images/iStockphoto

“I am excited about joining at such a challenging time for the poultry industry. The current outbreak of highly pathogenic avian influenza (HPAI) has put the industry as a whole, and SAPA and its Egg Organisation, on high alert, and a comprehensive response plan is in place to ensure that everything possible is done to minimise the impact of the disease. We are taking this very seriously,” said Balarane.

The egg layer industry bore the brunt of the disease during the previous HPAI outbreak in 2017 and, according to a SAPA statement on Monday, it is hoped that lessons learnt then will enable the industry to minimise the damage this year.

A broiler breeder farm in Worcester, Western Cape, last week was the latest to detect the virus, after five other farms in Gauteng and the North West.

Avian influenza is a viral respiratory disease of birds spread by direct contact between healthy and infected birds or through indirect contact with contaminated equipment or other materials.

The virus is present in the faeces of infected birds and discharges from their noses, mouth and eyes. Domestic birds can be infected through faecal contamination of the environment from wild birds or by indirect contact with infected poultry on other premises.

There is no vaccine or treatment for highly pathogenic avian influenza. Current practice in most regions of the world requires the culling of infected birds.

According to the Western Cape agriculture department, it was crucial to keep poultry and other animals “away from wild birds and their body fluids through screens, fencing or nets”.

“Avoid introducing the virus through contaminated clothes, footwear, vehicles, or equipment used in waterfowl hunting. Upon entering or exiting properties, disinfect vehicles. Do not allow any person who had contact with poultry in the last 48 hours on to your property. Use footbaths upon entry and exit to the poultry house to disinfect footwear,” it said.

The department advised consumers there is no indication that this strain of avian influenza can affect humans.

“We advise caution when handling or slaughtering potentially infected poultry. Poultry workers, abattoir workers and those who dress their poultry should handle dead birds with gloves or disinfect their hands after handling carcasses.

“Poultry products from grocery stores are safe for consumption,” the department said.

A fifth outbreak of avian influenza has been announced by the agriculture, land reform and rural development department — on a commercial chicken ...
News
1 year ago

Another East Rand poultry farm has been hit by avian influenza, the SA Poultry Association said.
News
1 year ago
Next Article