Creatives irked after meeting was cancelled at the last minute 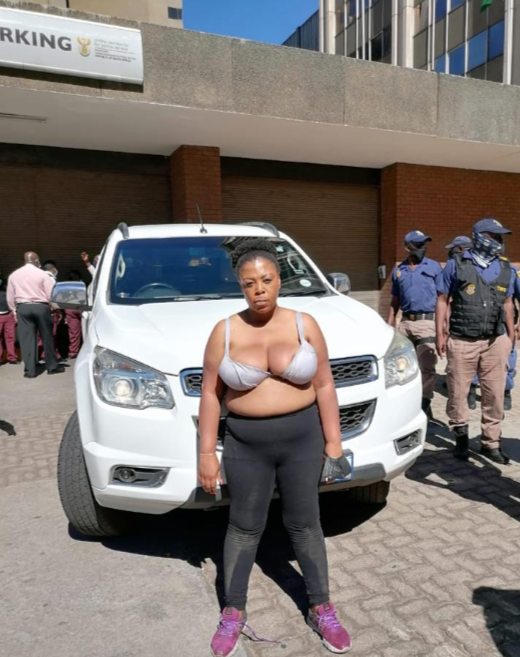 Music artist Sibongile Mngoma stripped half-naked after a meeting scheduled to take place between artists and a government minister was cancelled abruptly.

Artists were dragged to clear the way for vehicles at the entrance of the minister of sports, arts and culture Nathi Mthethwa's Pretoria offices on Tuesday.

A group of five artists were among creatives who blocked the entrance of the building. They were also pushed around by police.

In videos and pictures posted by the group of creatives, opera singer Sibongile Mngoma was left topless after her blouse was stripped off by the police.

The creatives had visited the department’s offices wanting answers on the memorandum of demands they submitted last week.

The situation was so tense that metro police, members of the SA Police Service and army were brought in to allow the staff locked inside to leave the building.

The department and creatives were supposed meet on Tuesday morning but the meeting was postponed to Friday at the 11th hour.

When the artists arrived in the morning, the building was protected by squad of security personnel. The artists said they were not going anywhere until they were attended to.

“After we had a good meeting with the department last week, they agreed to meet us today. They decided to  postpone the meeting at the 11th hour. I received a text when I was on my way here from Bloemfontein. I refused to allow that to happen. The cancellation was at the last minute. Now they are harassing us for having this peaceful picket. They have dragged me on the floor, I have bruises,” Mngoma said.

Last week, the artists tabled their demands where they wanted Mthethwa to resign over what they said was lack of understanding of the industry.

Presidency spokesperson Tyrone Seale has failed to respond to numerous requests for comment on the matter.

He was sent two emails last week. His phone went unanswered and he never responded to a WhatsApp text, despite reading it.

The group further demanded the public release of the forensic report on the mismanagement of Presidential Employment Stimulus Programme (PESP) funds.

They further wanted the department to release all information regarding recipients of Mzansi Golden Economy (MGE) funding.

“Whoever is inside will never go out; we don’t mind standing here for 60 days like we did with NAC [National Arts Council]. Those who are outside will not access the building until someone speaks to us.”

Department spokesperson Zimasa Velaphi said she was still consulting with her bosses and will come back with a response.

DSAC spokesperson Masechaba Ndlovu said: “The meeting was postponed to 5 November 2021 to accommodate other sector organisations so that the Department of Sport, Arts and Culture can engage in a broader sectoral meeting. This was communicated and Ms Mngoma was well aware of this but insisted on making her way to the DSAC offices.”

The arts and creative sector has been left with unanswered questions after minister of arts and culture Nathi Mthethwa's briefing on a forensic ...
Entertainment
2 months ago

A group of artists and creatives who were scheduled to visit the department of sport, arts and culture in Pretoria on Monday has been refused entry.
News
6 months ago
Next Article