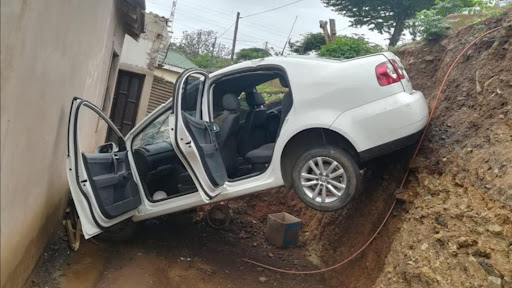 A car crashed into the side of a house in Verulam on Sunday.
Image: Reaction Unit SA

A car with five occupants crashed into the side of a house in Verulam, north of Durban, on Sunday.

According to Balram, paramedics dispatched to the scene were informed by residents that three people, including the driver, allegedly fled the scene, leaving behind two injured passengers.

“The two sustained moderate injuries and were transported to hospital by ambulance. Circumstances leading up to the accident were not immediately established.

“The occupants of the residence were not injured,” said Balram.

Young driver in accident which claimed six did not have a licence, say police

A 19-year-old pupil who drove his father's vehicle and lost control, killing six pupils in the accident, did not have a driver's licence.
News
9 months ago

A woman was killed, and a one-year-old child and four adults were injured in a head-on collision on the N12 highway near Fochville on Saturday ...
News
3 months ago

Two men killed in a horrific tanker crash on the N1 northbound in Johannesburg this week were on their way to a mine in Limpopo to start new careers.
News
3 months ago
Next Article