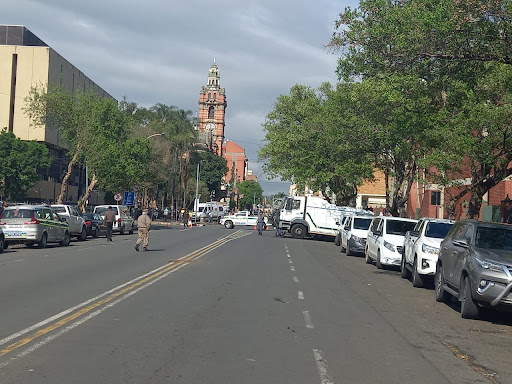 The streets outside the Pietermaritzburg high court were on lockdown ahead of the corruption trial of former president Jacob Zuma
Image: Nivashni Nair

A legal team appointed by the state, which has been given access to former president Jacob Zuma’s medical records, has deemed that he is fit to stand trial.

This is according to the latest affidavit filed by advocate Billy Downer, who is leading the prosecution team in the arms deal trial in which Zuma and French arms company Thales are facing a myriad of charges.

Zuma wants Downer - and in fact all National Prosecuting Authority (NPA) prosecutors - off the case, claiming they are biased.

And this will be tested when the trial eventually gets under way with a “special plea” in terms of the Criminal Procedure Act, during which Zuma indicated he wishes to give oral evidence.

He placed  on record that Zuma, who was admitted to a private hospital while serving a 15-month sentence imposed by the Constitutional Court for contempt of its ruling that he appear before the Zondo commission of inquiry into state capture, had subsequently been released on medical parole because of his deteriorating medical condition.

He accused Downer of leaking documents regarding his condition to a journalist and “unlawfully” sending a heart specialist, Prof Andrew Sarkin, to examine Zuma.

While he conceded that Judge Koen had ordered that the state could appoint its own medical experts to examine him, this was on the basis that Zuma’s medical team would first provide a comprehensive medical report for the NPA to formulate an opinion.

Essentially, he accused Downer of jumping the gun on this.

Downer, in his affidavit, denies all of the allegations.

He says in spite of undertakings, the state did not receive the comprehensive medical report on time, and then Zuma’s doctors did not initially provide all of his medical records.

Based on what they did get, Sarkin, Prof Martin Brand, a gastric surgeon, and Dr Albert Muranda, a nephrologist, concluded in a report dated September 14 that Zuma was medically fit to stand trial.

The following day, Zuma’s doctors agreed to provide all the records, and Sarkin, having perused these, agreed that he was, indeed, fit to stand trial.

Regarding the leaking of “confidential information”, Downer says the initial medical report which he attached to an affidavit, was “general”, and only referred to Zuma’s “condition” and that it would take six months for him to recover.

He said it was Thusini who had revealed in his court papers that Zuma was being treated at a hospital in Pretoria.

He said there were now protocols in place and any further detailed reports would be sealed, with only the lawyers and the judge having access to them.

Downer said a member of the team had given the court papers to a journalist to enable accurate reporting, in line with constitutional imperatives.

Regarding the “unlawful attempt” to physically examine Zuma, he denied sending Sarkin to the hospital “for the purpose of examining him”.

“I note that Mr Thusini does not say that he was present during this alleged incident, nor is there any affidavit by (Zuma) or anyone else who confirms this evidence.

“The state has not sought to enforce its rights to have him medically examined. Instead the state has focused on the meetings between the two medical teams and the provision by Zuma’s team of the records and information needed by the state-appointed doctors to prepare their medical report.”

Meanwhile security around the Pietermaritzburg high court was tight on Tuesday ahead of the court proceedings.

Police had cordoned off the main road and Freedom Square, where Zuma supporters usually gather,

Former President Jacob Zuma said: “The Constitutional Court in this case somehow found it fitting to deviate from its own rules and it was again ...
News
8 months ago

If Smangele Hadebe was a number she would be a perfect 10. That is how best to describe her flawless performance in Pretoria on Saturday night. ...
Sport
8 months ago
Next Article