Pastors and professionals band together to form political party 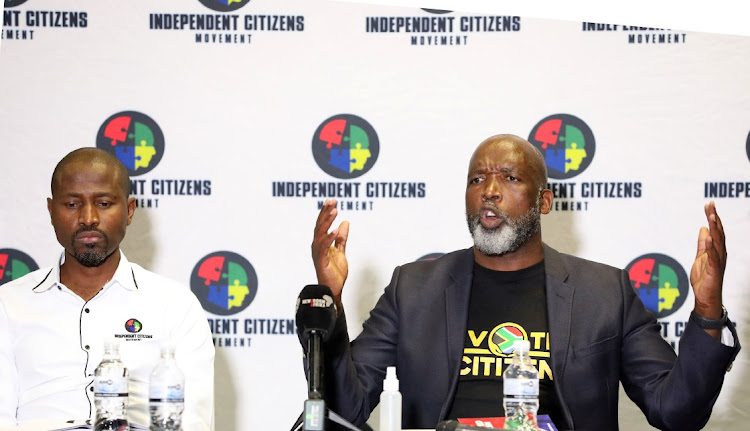 Chaiperson of the Independent Citizen Movement Joe Mojapelo and mayoral candidate Rev Chriis Mathebula at the launch of the organisation in Kempton Park.
Image: Veli Nhlapo

A group of religious leaders has established a movement which they will use to contest the upcoming local government elections and later the general polls.

The Independent Citizens Movement (ICM) was launched on Thursday at the Hope Restoration Ministries in Kempton Park.

ICM will contest all the 112 wards in Ekurhuleni. It is made up of pastors and professionals who are independent candidates that are already “making a difference” in their community. At least 45 of the 112 wards will be contested by pastors.

Chairperson of the movement Joe Mojapelo, a former chief operations officer of the City of Ekurhuleni, said the formation of ICM has been in the pipeline for two years.

The main aim of establishing the movement is to address the problems that SA is facing, some of which were laid bare during the July looting which took place in Gauteng and KwaZulu-Natal, Mojapelo said.

“We are not a political party. We are not interested in politics. We are about communities. We are about people. That is what led us to form this organisation. We are a movement of ethical leaders. We are saying we are looking for people who are already doing something in their communities – leaders who have to be recognised.

“We believe leaders cannot emerge just because there is elections. Leaders lead among us and need to be recognised and elevated into positions where they can serve,” Mojapelo said.

He said there are many leaders in communities who want to make a bigger difference but do not know what to do, hence the ICM will be their home.

The movement will contest in Ekurhuleni only and will be open to be engaged in coalitions only with organisations aligned to its values. ICM will later contest the general elections in 2024.

“We’ve seen so many things going wrong in our country and in government. Everybody talks about them but no-one does anything. People are complaining and are tired of corruption  and what is happening in country but they say there is no alternative.

“We said the power is in the ballot paper. We felt we cannot change anything by sitting in corners and talking,” Mojapelo said.

ICM’s founding principles are rejection of the status quo of poverty and unemployment and the promotion of servant leadership aimed at promoting patriotism, payment of taxes and adherence to law.

Rev Chris Mathebula, who has been a pastor at the Hope Restoration Ministries, is the mayoral candidate for ICM. He leads a congregation of about 20,000 people.

Mathebula said the movement had to be established now because of the deepening crisis the country is facing.

“Those who are in the Titanic who thought they were safe, now they are no longer safe. Churches were closed, an indicator that they do not see the importance of the churches. There is no better time to do what we are doing than now,” Mathebula said.

'Reforming the ANC is a painstaking process' - Zamani Saul

Reforming the ANC is a painstaking process that may even outlive President Cyril Ramaphosa’s time at the helm of the ruling party.
News
4 months ago

Niehaus will have to produce record of work he did for the ANC: Pule Mabe

Dismissed ANC staffer Carl Niehaus will have to provide evidence of the work he did for the party - at least since party secretary-general Ace ...
News
4 months ago
Next Article