Jele owes it all to Khoza, he says of magical 400 milestone at Orlando Pirates 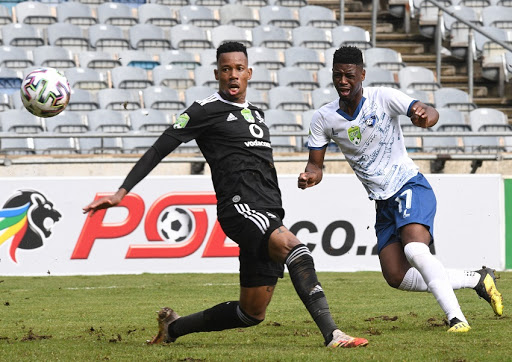 Tshepo Chaine of Uthongathi is challenged by Happy Jele of Orlando Pirates during the Nedbank Cup match at Orlando Stadium on February 6 2021.
Image: Sydney Mahlangu/BackpagePix/Gallo Images

Orlando Pirates captain Happy Jele has revealed it was the support he received from club chairman Irvin Khoza when he had a career-threatening injury that led to his 400th appearance milestone reached this past weekend.

The 34-year-old defender, who signed a year's extension to his contract in August, became the first Pirates player to reach 400 games in their 1-0 DStv Premiership win against Swallows FC at Orlando Stadium on Saturday. Jele had earlier beaten 1990s Nigerian goalkeeping legend Williams Okpara's 16-year-old club record of 375 appearances.

In 2011, the defender tore a meniscus and damaged his anterior cruciate and medial collateral ligaments in his knee and underwent surgery that kept him out of action for more than a year.

Jele said Pirates' management supported him throughout on the road to recovery from the potentially debilitating injury.

“I would like to thank the club chair Dr Irvin Khoza and the management for believing in me when I had a career-threatening injury,” said the Mpumalanga-born defender.

“I would like to thank them for awarding the opportunity to return to the field and do what I love.”

He added: “It’s an honour for me to play for Pirates, a big club in the country and on the continent. To have been a part of the club for 15 years is a big personal achievement, and I want to keep going and pushing.”

The versatile defender has spent his entire 15 years as a professional player at the Buccaneers.

“It has to be winning my first trophy with the club,” he said of his highlight of that journey.

“It was the [2010] MTN8. You know playing for Orlando Pirates and winning a trophy is a big deal.

“Then to go on and win a treble in that same season [2010-11] and repeat that the next season, that was another big moment.

“Another one that stands out was leading the team to the CAF Champions League final in 2013. As a player, you want to compete against the best. Even though we went on to lose that final, for me it was an honour to participate in that competition and making it that far while leading the team.”

Asked what he would still like to achieve with the club in 2021-22, both as player and leader, Jele said his wish is to play regularly.

“Staying fit and doing my best on the field,” he said.

“The first thing is to play regularly but I would also want to win one or two more trophies before I call it a day. Hopefully, we can achieve that.”