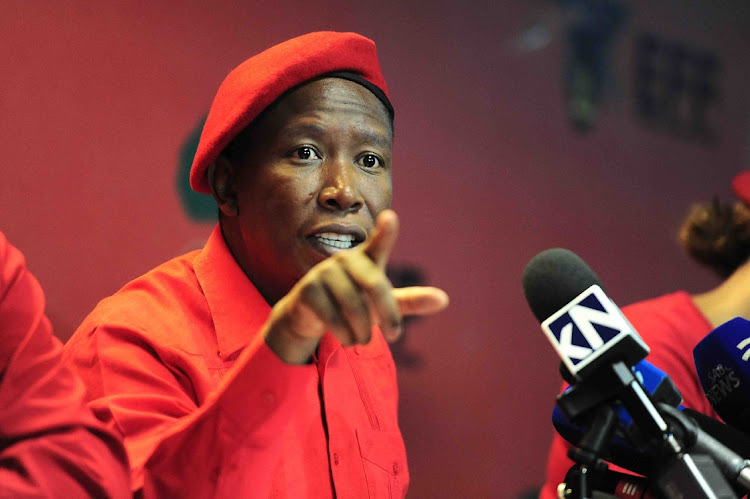 EFF leader Julius Malema says his party will push for the private prosecution of President Cyril Ramaphosa over his alleged role in the 2012 Marikana massacre due to the failure of the police and the prosecuting authorities to work on the case Malema opened against him.

Malema made the announcement as various organisations commemorated the killing of 34 and injuring of 78 striking mineworkers by the police as they demanded wage increases and improvements to their working conditions by Lonmin mine, of which Ramaphosa was a director.

While it was revealed that Ramaphosa had sent an email in which he called for “concomitant action” into what he described as criminal acts during the strike, he had been cleared by the Farlam commission of inquiry into the tragedy.

Mining union Amcu on Monday held a hybrid commemoration event for the massacre in Sandton, where several organisations and political parties joined those who were affected by the tragedy.

Malema slammed that there had been no action against anyone for the deaths of miners, which he said had been the result of greed from Lonmin and Ramaphosa, against whom the party opened a criminal case in Marikana alongside cabinet members at the time, including then mineral resources minister Susan Shabangu and then police minister Nathi Mthethwa.

Malema said South Africans were partly to be blamed  as they voted for the governing party.

Malema said the EFF would now write to the National Prosecuting Authority (NPA) to demand a “non-prosecuting letter” to enable his party to take on Ramaphosa through a private prosecution.

“We are making this call now and we commit to give a report on progress we have made in the celebration of the 10th anniversary, when we will report whether we are succeeding with private prosecution. It has been nine years since we opened the case,” he said.

Malema said he had never been contacted by any police or prosecutor over the years and warned that if the NPA did not give them the letter “in the next three months we are taking them to the high court so that they either prosecute or they allow us to pursue private prosecution”.

Malema insisted that the ANC-led government had to take full responsibility for the victims of the Marikana tragedy and compensate them.

“We have not killed anyone in Marikana but already we have contributed R1m  into the trust that is aimed at looking after the widows and the children of those who were killed, but those who killed our people have not contributed not even a cent,” he said.

Other political parties also used the commemoration to bash the ANC, with UDM leader Bantu Holomisa calling for opposition parties to form a united force in the next national elections in a bid to push the ANC out of power.

Holomisa said the ANC-led government had failed to show remorse for the brutal force it had applied to beat striking workers into submission.

He said the mounting scandals of looting within government had to unite opposition parties to jointly work together to take on the governing party.

“I am advising that, between now and 2024, all parties who are not happy with what is happening under the current government unite under one roof and put a way forward and put aside their political hats but provide  solutions of how we get out of this,” Holomisa said.

Speaking on behalf of the Marikana widows, Nosakhe Nokhamba, said the government had allegedly ignored the families for years despite efforts at getting assistance.

Nokhamba’s husband, Ntandazo, was 36 years old when he was gunned down along with other miners on the fateful day of Aug. 16, 2012.

“Nine years have passed but we have not seen any change and we have not got the answers on who ordered the killing of our husbands by the police,” she said.

Nokhamba said she had been instructed by the Marikana widows to point out to the government that their demands remained, including the provision of proper education for their children as well as job placements, and declaring August 16 a public holiday to keep the memory of the tragedy and its victims alive.

Nine years on, yet no progress in case against those implicated in Marikana massacre: NGO

The Bench Marks Foundation says little progress has been made in bringing those implicated in the killing of 34 miners in Marikana nine years ago to ...
News
9 months ago

Nine years after the Marikana massacre, the sister of the most famous victim, Mgcineni “Mambush” Noki, the “man in the green blanket”, says ...
News
9 months ago
Next Article