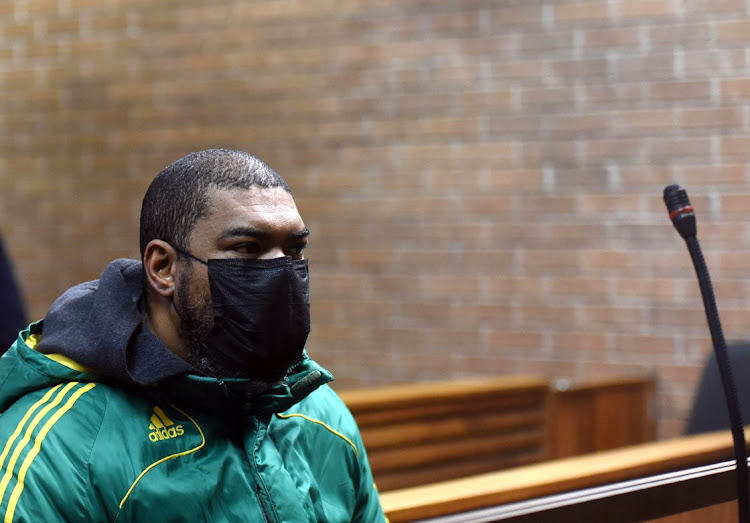 Bruce Niemerhoudt regional leader of Patriotic Alliance, has been accused of inciting violence through a voice note from his cellphone.
Image: Veli Nhlapo

A Roodepoort magistrate has poked holes in the state’s case against an alleged instigator of the recent riots that followed the imprisonment of former president Jacob Zuma.

Niemerhoudt, regional chairperson of the PA on the West rand, was arrested on July 16.

He is accused of recording and distributing a voicenote on WhatsApp in which he urged community members on the West rand to barricade major roads and vandalise malls when riots that erupted in KwaZulu-Natal spread to parts of Gauteng.

Gumede testified that intelligence information they had received indicated that Niemerhoudt was the author and owner of a device that was used to distribute the voicenote.

“Your intelligence indicates that the owner is the author of the device, do you not see a problem with that statement?” asked Africa.

Gumede responded that he did not understand the question.

Africa further asked if Niemerhoudt had been on the police’s radar before the circulation of the voicenote on July 15, to which Gumede said he did not know.

Gumede further told the court that Niemerhoudt confirmed that the voice in the note was his but said he did not distribute it.

“We had information about the address and the person we were looking for and we went to effect the arrest,” said Gumede.

However, earlier in the day Niemerhoudt testified that he was not responsible for creating and distributing the voicenote.

Niemerhoudt, who was led through his evidence by his attorney, Calvin Richards, told the court that he received the message through a PA WhatsApp group consisting of 95 members at about 9.45pm and that he was alarmed by it, compelling him to send it to a member of the Randfontein Taxi Association.

“After listening to the voicenote I responded and said that we should not take the threat lightly in light of what was happening in the country. I forwarded the message to Graham Vrits from the Randfontein Taxi Association because we were in contact about mobilising community members to prevent looting in our areas,” said Niemerhoudt.

He said he had intended bringing the matter to the attention of the Randfontein police commander the next day.

“The PA’s stance in light of the looting was to mobilise communities to key shopping centres and garages to safeguard them. It was not to loot or destroy infrastructure. I believe I was arrested because I was being framed to defame my character,” said Niemerhoudt.

Luna Dickson, a councillor candidate in Toekomsrus, testified that she sent the voicenote to the WhatsApp group after she received it from her aunt. She proceeded to show the court the message and the voicenote was played in court.

“The Hawks called me and they came to take my statement. I told them that I received the note and sent it to the group and I also told them who sent it to me,” Dickson said.

Africa postponed the matter to Friday, when she is expected to hand down judgment on Niemerhoudt’s bail application.

In another matter against Keke Tabane, who is also accused of incitement of violence, the ANC branch secretary on the West rand was on Monday granted R5,000 bail.

“A statement in the possession of the state alleges that the accused wanted to gather members of the community to collect tyres and burn them to block roads. The matter is a schedule 1 offence and that is why he was granted bail,” said Mjonondwane.

The four accused who appeared in courts in Gauteng for allegedly instigating a week of deadly violence “are lower than low hanging fruit”.
News
5 months ago

“I have been called all manner of expletives, with commentators hoping that I will, and I quote, 'die a slow and painful death'," Buthelezi said.
News
6 months ago

Malema wants DA to retract and apologise for incitement allegations

EFF leader Julius Malema wants the DA to retract and apologise for allegations it made that he incited violence last week, and is threatening to sue ...
News
6 months ago
Next Article