Ten appear in camera in Verulam court on unrest-related charges 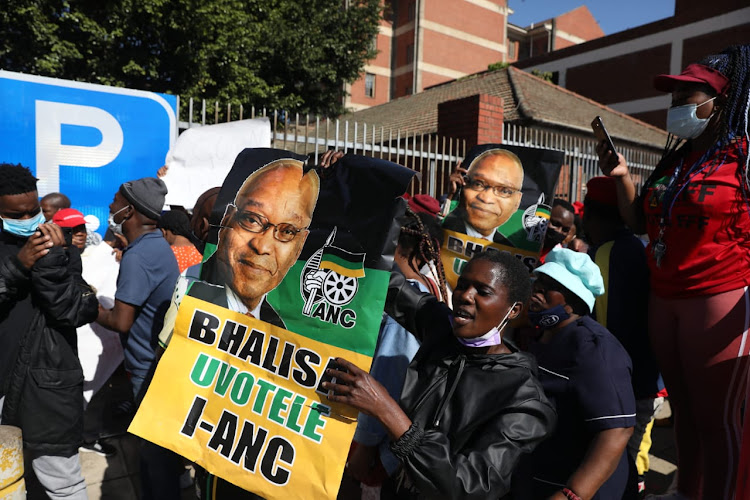 A protester holds a poster of former president Jacob Zuma outside the Verulam magistrate's court on Monday, where 10 people appeared on unrest-related charges.
Image: Sandile Ndlovu

Ten people appeared in the Verulam magistrate's court on Monday in connection with unrest-related charges after violent protests that shook KwaZulu-Natal and Gauteng two weeks ago.

Natasha Kara, regional spokesperson for the directorate of public prosecutions, said their appearances were held in camera to protect the identity of the accused as identity parades are yet to be conducted.

The cases were remanded to Friday for bail consideration.

Supporters continue to sing and chant outside the Magistrates Court In Verulam.

They demand the prosecution of individuals responsible for the deaths of their loved ones during the #Phoenix murders.@TimesLIVE pic.twitter.com/cW9jBSOddn

Outside court, tensions were high as two groups of protesters — family and friends of the accused as well as ANC and EFF supporters — were separated by a strong police and army presence.

The province was plunged into chaos after former president Jacob Zuma was incarcerated at the Estcourt correctional facility in compliance with a Constitutional Court order that he be sentenced to 15 months for contempt after he refused to appear before the Zondo commission.

In KZN, she said 110 murder investigations were under way in eThekwini, 20 in Umgungundlovu, nine in Ugu, eight in iLembe, six in King Cetshwayo, three each in Harry Gwala, Umzinyathi and Umkhanyakude, and one in Amajuba.

Private ambulance service paramedics were traumatised after their vehicle came under attack while they were rushing to attend to a medical emergency ...
News
4 months ago

Protesters continued to loot shopping centres in KZN on Monday morning. Some were seen walking off with appliances including TVs and washing ...
News
4 months ago
Next Article