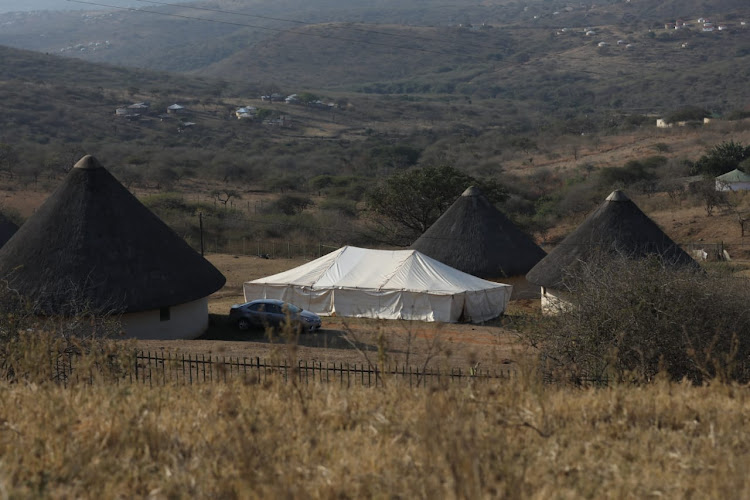 Preparations are under way for the funeral of Michael Zuma at the family's Nkandla homestead.
Image: Sandile Ndlovu

Michael Zuma, the late brother of former president Jacob Zuma, has been described as a kind-hearted and polite man.

Michael died on Sunday July 11 after battling an undisclosed sickness for almost seven years. He will be buried at his KwaNxamalala home on Thursday.

The correctional services department confirmed on Thursday morning that Jacob Zuma had been granted permission to attend the funeral.

His 77-year-old brother and senior member of the Zuma family, Khanya Zuma, told TimesLIVE of the fond memories they shared growing up in Nkandla.

“Indeed the family is devastated at the death of our beloved brother, Mike. We are shattered and in pain because we have lost a dear man, as the Zuma clan and the community.

“He was a good brother with a big heart. There is no wrong I have known about him. He always spoke kindly and he was funny, too. I only have nice words about him.

“He didn't involve himself in politics or fighting games like his big brother, Jacob, who was courageous and loved stick fighting. “JZ” was the best fighter,” he said.

The department of correctional services has confirmed that former president Jacob Zuma has filed an application seeking permission to attend his ...
News
5 months ago

According to Khanya, Mike moved to Nkandla at age 12, from KwaMaphumulo near Greytown, where he had been living with his uncles.

He immediately took to the area and loved being around his many siblings in the Zuma clan.

Over the years, his illness deteriorated before his family and neighbours, who will remember him for his well-distinguished clan praises in cultural events.

“He knew our uncles' names and our forefathers. He would call and praise them in such a way that one wouldn't believe that he was the youngest of the boys. That is a true gift in our culture,” he said.

Khanya added that it would bring peace to the family if their brother, Jacob, was granted permission to attend the funeral.

He said their big brother had been troubled by Mike's illness for years, having taken him to numerous hospitals and doctors in efforts to improve his health.

'We have all been saddened by his illness. Jacob was always particularly concerned by his condition. He always spoke with me about being worried at Mike's health. He made it a point to accompany him to see doctors in hope that his situation would improve,” he said.

The former president has been behind bars since July 8 this year when he started serving his 15-month sentence at Estcourt prison in the Midlands for contempt of court .

It remains to be seen whether former president Jacob Zuma will attend his late brother’s funeral on Thursday, after correctional services confirmed ...
News
6 months ago

The chairperson of the National House of Traditional Leaders, Inkosi Sipho Mahlangu, has died.
News
6 months ago
Next Article