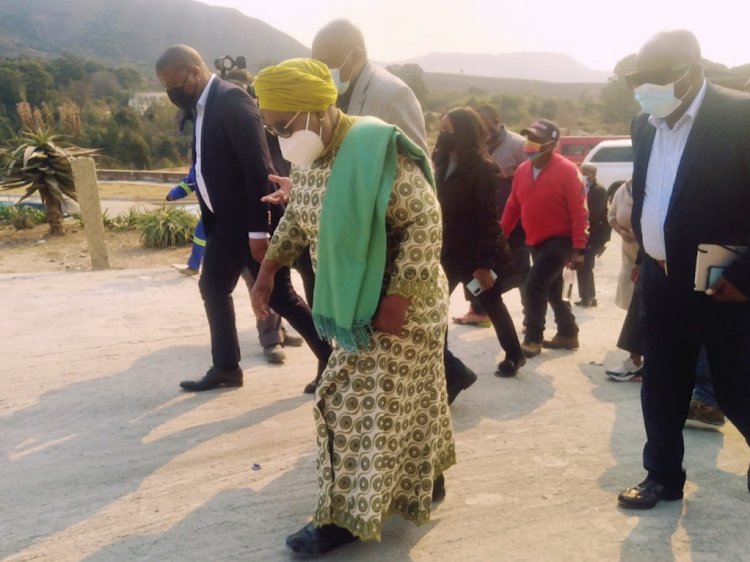 Cogta minister Dr Nkosazana Dlamini-Zuma led a visit to the unrest-hit towns of Bulwer and Donnybrook in KwaZulu-Natal on Tuesday.
Image: Mluleki Mdletshe

The provincial government has called for a state of disaster to be declared in parts of KwaZulu-Natal, after civil unrest and looting in the province.

Sipho Hlomuka, co-operative governance and traditional affairs (Cogta) MEC, made the announcement during a governmental visit to the midlands towns of Bulwer and Donnybrook on Tuesday, which did not escape the wrath of looters.

The delegation, led by Cogta minister Dr Nkosazana Dlamini-Zuma, included senior officials from the national and provincial departments and the Disaster Management Centre.

Here in Bulwer there is literally nothing for the people to sustain themselves with.

The visit follows last week's looting, violence and destruction of property in large parts of the province.

Hlomuka, speaking in the Bulwer CBD where most shops had been burnt to ashes, said the provincial government would engage various ministers at national level to appeal for their guidance and support in restoring the affected towns.

“Indeed, we are meeting the provincial government to assess all the areas affected. We are very worried and we want to ensure that we at least declare the state of disaster in some of the areas.

“Here in Bulwer there is literally nothing for the people to sustain themselves with. As the government it is important to support and help people,” said Hlomuka.

KZN MEC for COGTA, Mr Sipho Hlomuka says a star of Disaster will be declared in areas mostly affect by the #KZNProtests and #kznunrest over the past week.@TimesLIVE pic.twitter.com/P7rzORKwNP

The delegation also interacted with community members, leaders and businesses owners whose shops were looted and vandalised.

Bud Monty, a manager at the local Build it, said the store had been completely looted, but they were keen on rebuilding and continuing to provide building supplies and jobs to the community.

“Our store has been operating as a hardware shop for about seven years here in the community. We employ more than 45 employees from the community directly and indirectly.

“The looting last week has had an absolutely massive affect on the community which relies heavily on this store for supplies. Everything has been taken, including windows, the light bulbs and cords from the store ceiling,” he said.

Another business owner, Mujahid Ali, a Pakistani who owns a fast food eatery in Donnybrook, lambasted the reaction of local police when looters stormed his shop.

“The police do not want to co-operate with us business owners. That is my main problem. When looters waited for me to close my shop at five in the afternoon, I rushed to the police station to report that they were about to loot my shop. The police ignored my report, and as a result my shop was looted and not a single person was arrested. And I know their faces.”

Zandile Gumede has denied having any involvement in the recent destruction and looting in KwaZulu-Natal and Gauteng.
News
10 months ago

On Monday the police recovered thousands of rand worth of items stolen from warehouses and retail stores in Durban during widespread looting in KZN ...
News
10 months ago

Dlamini-Zuma, whose home is in Nkumba, less than 15km from Bulwer, urged communities to work together to restore their towns.

Addressing residents and business people at the Bulwer Community Service Centre, Dlamini-Zuma said the community had shown commitment to working together in cleaning and rebuilding their town.

“As we walk through the town, we are very sad about the extent of the destruction. But the communities are appreciative of the efforts being made to restore it,” she said.

“We must rebuild, keeping in mind that we have communities to take care of and we can do this by creating more jobs. Let us ensure that communities are contributing to the economy of their local municipalities and their towns.

“This can be through farming or by planting vegetables and produce to sell in town because there is simply nothing for the people of Bulwer to survive on, apart from the garage convenience stores, which have limited food supplies.”

Dlamini-Zuma said soldiers had been deployed to assist the police.