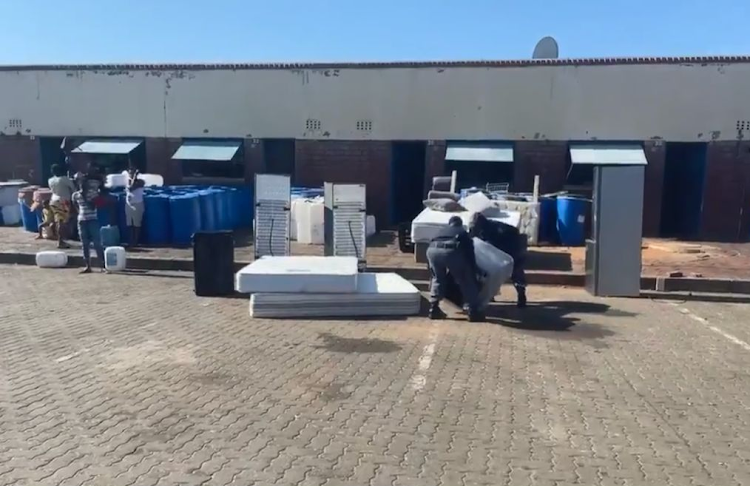 Police recovered thousands of rand worth of looted goods, including beds, electronic appliances and mag wheels, in and around Durban on Monday.
Image: Lirandzu Themba

Police minister Bheki Cele says evidence rooms are full as goods are being confiscated from looters.

On Monday the police recovered thousands of rand worth of items stolen from warehouses and retail stores in Durban during widespread looting in KwaZulu-Natal last week.

“They are going to SP13, where police keep anything that might be used in giving evidence. There is a meeting between the police and the NPA to work out what will happen to the goods,” Cele said.

“Evidence rooms are full. They [looted goods] are in the custody of the police. Right now we are trying to get a warehouse where we can keep them and police take care of them.”

Cele, who was scheduled to visit Pietermaritzburg and also malls in Durban, was delayed as the police acted on tip-offs from community members on the whereabouts of stolen property in areas in and around the Durban CBD.

The police had arrested 3,407 suspects on different charges by Sunday after a week of violence, looting and destruction, with only one suspect granted bail and 1,122 expected to appear in court in KZN and Gauteng.

“We are not going to give the numbers on goods recovered, their value will be determined at the closure of the operations.

“A warning has also been issued to those who were not part of the looting sprees but are buying stolen property from the looters that they too will be arrested for being in possession of the stolen property.”

Thandi Johnson is in deep emotional anguish after seeing her life’s work destroyed by the looting that ravaged her store in Diepkloof, Soweto, last ...
News
10 months ago

Retired magistrates and prosecutors roped in to expedite unrest cases