Police have confirmed that the violent civil unrest had also spread to Mpumalanga and the Northern Cape, though at lesser intensity than seen in Gauteng and KZN. 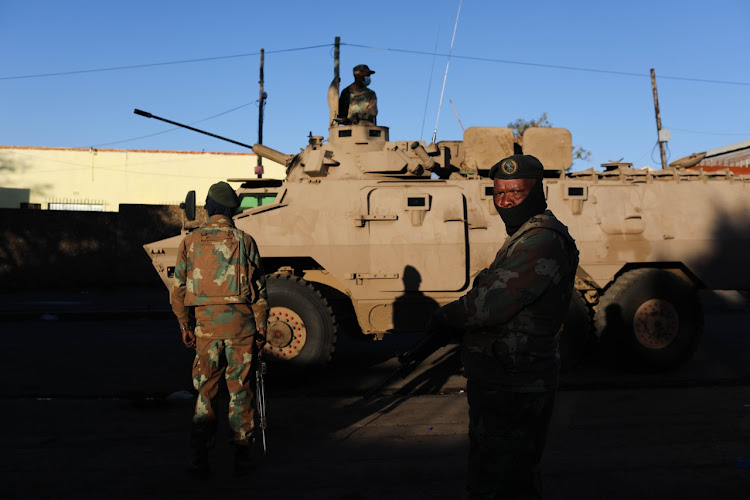 As soldiers hit the streets of Durban and Johannesburg on Tuesday, the police confirmed that the death toll in violent riots and looting had climbed to 72.
Image: Alaister Russell/The Sunday Times

At least 72 people have died in riots and civil unrest in Gauteng and KwaZulu-Natal, say police, while confirming that the violence has spread to two other provinces.

Col Brenda Muridili, speaking on behalf of the National Joint Operational and Intelligence Structure (Natjoints), said that 14 murder cases were being investigated in KZN and 19 in Gauteng. There were 13 inquest dockets opened in KZN and 26 in Gauteng linked to fatalities.

“The greater part of the inquest dockets relate to stampedes that occurred during incidents of looting of shops and malls, while other deaths and injuries were related to ATM explosions and shootings,” said Muridili.

Police minister Bheki Cele visited Alexandra on July 13 2021 following sporadic outbreaks of violence that have left at least 19 dead in Gauteng and 26 in KwaZulu-Natal.

Muridili said seven SAPS officers — three in KZN and four in Gauteng — were recovering from injuries sustained while responding to violent protests.

In her statement, Muridili said that there had been 1,234 arrests to date linked to the violence. Of these, 683 were in Gauteng and 549 in KZN. There was one arrest in Mpumalanga and another in the Northern Cape.

The Mpumalanga arrest related to the “looting and destruction of property in the Matsulu policing precinct”, while the Northern Cape arrest came after “a report of two incidents” in Galeshewe.

“The two latest provinces to be affected, Mpumalanga and the Northern Cape, have had their law-enforcement officers patrolling identified areas of threat in an effort to deter possible opportunistic criminality,” said Muridili.

She said that provincial commissioners had been speaking to community leaders, traditional leaders and the business community “to amplify current operational plans to best tackle the looting and destruction of property now prevalent in KZN and Gauteng”.

Among those arrested were two on-duty reservist constables in Soweto, who were “found in possession of property alleged to have been stolen during the incidents of looting of businesses”.

“It is further alleged that the two suspects were found offloading suspected stolen property from a state vehicle,” said Muridili.

But while police were taking action against looters and rioters, they have also warned communities — who had set up patrols and prevented access to their roads and suburbs — they must not take matters into their own hands.

“In response to reports of armed community members retaliating against protesters, the Natjoints has emphasised and reminded the public that though people are entitled to protect their property and lives, the Right to life is protected in the constitution, and can only be infringed in extremely limited circumstances to protect the life or bodily integrity of the defender,” said Muridili.