'We are saying no to the barbaric behaviour of looting,' Diepsloot Residents' Association secretary Akim Zulu said. 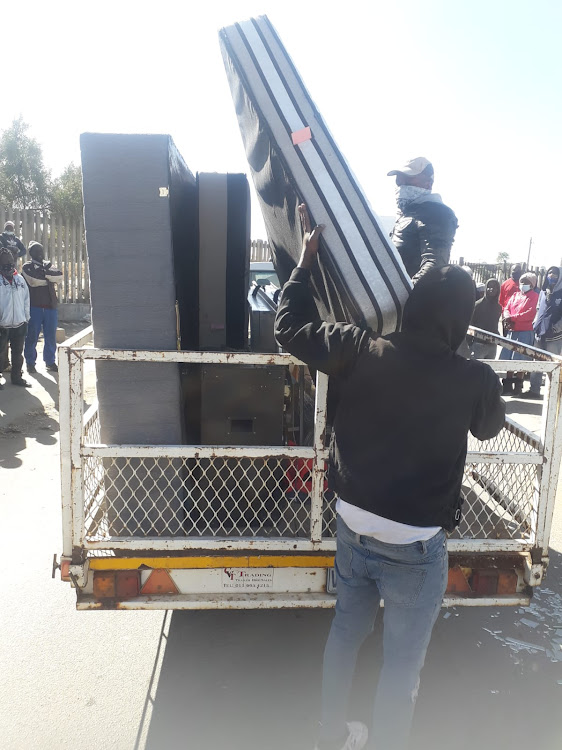 The Diepsloot Residents' Association went on a door-to-door operation to recover items that were looted by community members from a nearby shopping centre.

Akim Zulu, the secretary of the association, said they received tip-offs on Tuesday morning on where the stolen items were within the community.

“When things happened, we had a meeting early in the morning and we decided to stay at Bambanani [mall] to stop community members from looting as there were some who wanted to go back to loot.

“We managed to get some information from residents, saying they saw some people running into the community from the mall. We then decided to a do door-to-door search to recover the items.”

Zulu said when they apprehended one of the alleged looters, they then made inroads and collected information that led to other houses to search.

“We managed to search half of the community,” he said.

The items they recovered include furniture, electrical appliances and clothes.

“They could not break into Shoprite and the liquor store, so they only took items from furniture shops,” he said.

'It's not about Zuma ... They're having a party': Joburg resident shares tale of living above deadly riots

'This time is bad. We aren't safe to walk around the streets. Looters are even looting from each other,' a resident of Berea, Johannesburg, said.
News
1 year ago

Zulu said they conducted the operation with the Johannesburg Metro Police Department (JMPD) and the Randburg United Long and Local Distance Taxi Association.

“We spoke to SAPS and they did not have enough personnel to assist us, so we did the operation with the two organisations. We are continuing with the operation tonight until 6am,” he said.

He said they wanted to “reclaim” Diepsloot and return it to its former glory, before it became a crime hotspot.

“We want to see Diepsloot in 2030 being a crime-free zone. We want a new Diepsloot which is free of crime. We are saying 'no' to the barbaric behaviour of looting.”

“The items have been taken to the SAPS pound in Diepsloot, where they have been recorded and attached to suspects arrested at their houses,” Minnaar said.

He said 15 people had been arrested and were detained at a police station.

“They will soon appear in the Randburg magistrate’s court,” said Minaar.

Zulu said the residents' association would write a letter asking the magistrate to not grant the suspects bail.

In another incident, Minnaar said JMPD officers on patrol received a complaint from members of public that there were looters in Rabie Ridge, Midrand.

“On arrival they found a grey bakkie loaded with building materials that were stolen from Builders Warehouse in Mayibuye. The suspects [who are] women were found in possession of stolen building materials and were detained at Rabie Ridge police station,” said Minnaar.

The JMPD arrested a Zimbabwean for allegedly looting at Cambridge Foods in Rabie Ridge.

SAPS said on Tuesday night that there had been 1,234 arrests made linked to violent riots and looting, with 683 in Gauteng and 549 in KZN. There was one arrest in Mpumalanga and another in the Northern Cape.

Police have confirmed that the violent civil unrest had spread to Mpumalanga and the Northern Cape, although at lesser intensity than seen in Gauteng ...
News
1 year ago

Eastern Cape premier Oscar Mabuyane wants the military to be on standby to help police if riots spread to the province.
News
1 year ago
Next Article