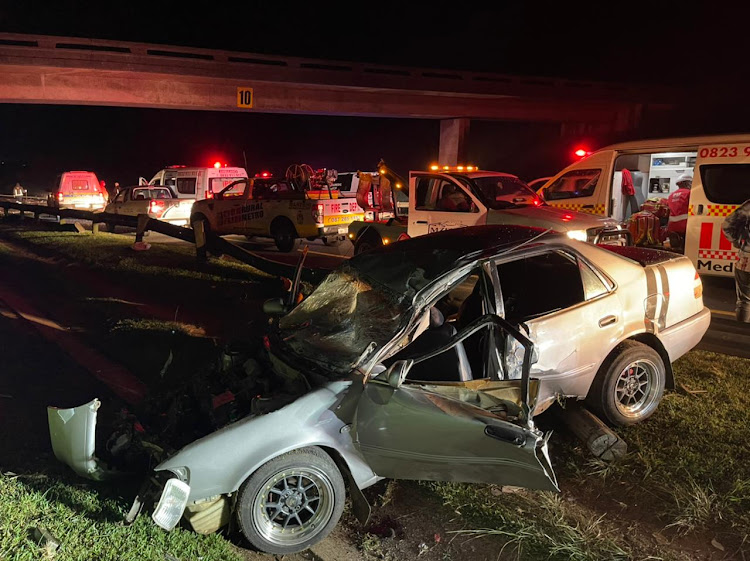 Authorities had to use the Jaws of Life to free a passenger from a car which swerved to avoid debris left by pro-Zuma protesters.
Image: IPSS

Five people were injured when a vehicle rolled on the N2 highway near Mandeni in KwaZulu-Natal after the driver swerved to avoid debris left on the roadway.

The freeway was one of several roadways blocked by protesters who have wreaked havoc across the province calling for former president Jacob Zuma’s release from prison.

Zuma handed himself over to authorities on Wednesday to start serving his 15-month prison sentence at the Estcourt correctional centre after being found guilty by the Constitutional Court of contempt for defying an order to appear at the state capture inquiry.

IPSS Medical Rescue spokesperson Paul Herbst said when their paramedics arrived at the scene in Mandeni on Saturday evening they found five people injured after the vehicle rolled multiple times.

One of the patients, a woman, was trapped in the car and Rural Metro Fire services had to use the jaws of life to free her. Paramedics stabilised patients on the scene before transporting them to local hospitals.

Police had their hands full across the province at the weekend trying to prevent looting amid the pro-Zuma riots.

The N3 toll route, the main economic artery between Gauteng and KwaZulu-Natal, was shut down for 24 hours at the Mooi River toll plaza, where rioters had burnt 23 trucks on Friday night.

After a “mammoth operation” to clear the debris and wreckage of the torched trucks, authorities managed to reopen the northbound and southbound lanes by midnight on Saturday.

“The rioters forced a total closure of this strategic transport corridor near Mooi River, which lasted more than 24 hours,” said the N3 Toll Concession in a statement on Sunday.

“Miraculously, no loss of life or serious injuries were reported, but the economic impact is vast, including extensive damage to a section of the road surface, particularly on the northbound carriageway.” 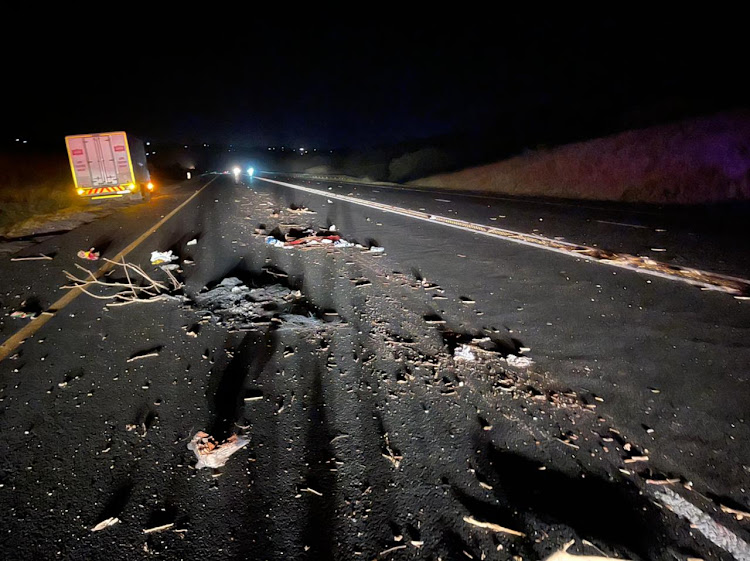 The driver swerved to avoid debris left by pro-Zuma protesters on the N2 highway.
Image: IPSS

They said that no further incidents were reported on Sunday morning.

“N3TC wishes to extend its gratitude to law enforcement and emergency services officials for their tireless efforts to secure and reopen the roadway,” said the statement.

“We would also like to acknowledge the efforts of the local humanitarian group Alimdad Foundation for their support of stranded truck drivers, and all road users for their continued understanding and patience under what were extremely difficult conditions. Thank you,” said Thania Dhoogra, operations manager of N3 Toll Concession.

“There remains a strong security presence in the area, but the probability of sporadic protests, especially at night, cannot be ruled out,” she said.

Dhoogra said drivers were advised to stay informed of traffic conditions on the route and that users could do so by following the N3 toll concession on Twitter @N3Route or by contacting the helpline at 0800 63 43 57.

KwaZulu-Natal police spokesperson Brig Jay Naicker said police were on high alert in the province after a busy night on Saturday.

“Our police officers had their hands full yesterday and throughout the night as we saw a lot of criminals or opportunistic individuals trying to enrich themselves during this period,” said Naicker.

He said a number of shops were looted and police made several arrests through the night in attempts to stop the looting.

“In Mariannhill alone we arrested nine people that were responsible for looting of shops in that area. They were charged for theft, public violence, as well as for contraventions of the Disaster Management Act,” he said.

He said there were a number of attempts to break into bottle stores.

“Fortunately police officers were quick to respond and prevent them from getting into the bottle stores so that they can get hold of the liquor,” he said.

He said officers would remain deployed along the major routes and in hotspots in the province.