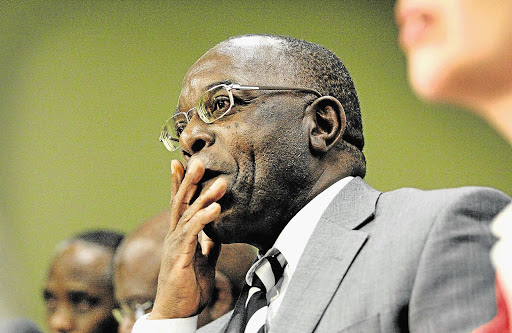 Judge Willie Seriti was chair of the commission of inquiry into the arms deal. A complaint against him and fellow commissioner judge Hendrick Musi has been referred to the Judicial Conduct Committee to decide whether it should be reported to the judicial conduct tribunal. File photo.
Image: PEGGY NKOMO

The Judicial Conduct Committee (JCC) will meet on June 12 to recommend whether a complaint against two judges who were appointed to the arms deal commission should be investigated and reported on by the Judicial Conduct Tribunal.

Their recommendation will be made to the Judicial Service Commission (JSC).

Deputy chief justice Raymond Zondo, who is acting chair of the committee, wrote a reply last week to two organisations — Shadow World Investigations and Open Secrets — which had lodged a complaint against judge Willie Seriti and judge Hendrick Musi in August last year.

The two judges were appointed by former president Jacob Zuma to act as commissioners in the commission of inquiry into allegations of fraud, corruption, impropriety or irregularity in the arms deal in 1999.

The commission published its final report of findings in April 2016. The report found no evidence of wrongdoing.

Lawyers acting for former president Jacob Zuma in the corruption trial due to start next month filed a formal notice of withdrawal in the ...
News
1 year ago

Shadow World Investigations and Open Secrets submitted a complaint to the JCC last year asking it to consider whether certain actions by Seriti and Musi may constitute criminal misconduct.

In their complaint, the organisations submitted that Seriti and Musi were guilty of gross misconduct.

In a letter to JCC members dated May 7, Zondo said he had considered the two organisations’ complaint against the two judges.

Zondo said he was satisfied that, in the event of the two organisations’ complaint being established, it was likely to lead to a finding by the JSC that Seriti and Musi were guilty of gross misconduct.

Zondo said in terms of the JSC Act, he was obliged to refer this complaint to the JCC to “consider whether it should recommend to the JSC that the complaint should be investigated and reported on by a tribunal”.

Zondo said at this stage, in deciding to refer the complaint to the JCC, he took into account only the complainants’ version.

He said Seriti and Musi were yet to file a response.

Zondo said at this stage only the complainants’ versions were required to be considered.

In their response, the two organisations said Zondo’s decision was a major step as it signalled the start of a process towards accountability.

“Both organisations welcome an opportunity to make representations to the committee. This first step towards accountability is a further vindication of civil society’s efforts to expose cover-ups at the Seriti commission, and the decision by civil society activists to withdraw as witnesses from the commission.”

Good party leader Patricia de Lille weighed in on the matter, agreeing with Selfe's that the report was "whitewash", adding that it aimed to please ...
News
2 years ago

The Right2Know Campaign on Wednesday said it was pleased with the outcome of Pretoria High Court ruling which set aside the findings of the Seriti ...
News
2 years ago
Next Article