Terry Crawford-Browne takes arms deal back to the ConCourt 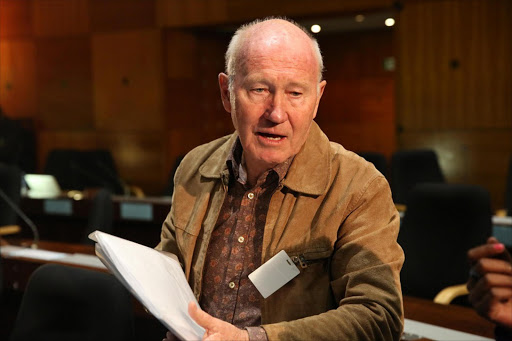 JUNE 11, 2014. Retired banker, Terry Crawford-Browne at the Seriti commission where former finance minister, Trevor Manuel, testified about his role in the Arms Deal. The commission was set up to investigate corruption in the Arms Deal. Crawford-Brown who forced President Zuma to investigate coprruption in South Africa's R70 billion arms procurement deal was reported to have now called for President Zuma to end the commission as it has become a farce. PIC: SYDNEY SESHIBEDI. © The Times

Arms deal activist Terry Crawford-Browne has filed an application asking the Constitutional Court to set aside the findings of a commission of inquiry‚ described by critics as a whitewash‚ headed by Judge Willie Seriti.

Crawford-Browne has long been a thorn in the side of government regarding its controversial purchase of military jets‚ helicopters and navy vessels.

The Arms Procurement Commission‚ headed by Judge Seriti‚ was appointed by President Jacob Zuma to probe the deal in response to legal action initiated in the Constitutional Court by Crawford-Browne in 2010.

Zuma said earlier this year that the commission of inquiry had found no evidence of wrongdoing in the deal.

“Despite public commitments to an open and transparent investigation‚ the commission proved a repeat of the 2001 stunt by President Thabo Mbeki to cover up the arms deal scandal‚” he said in a statement.

“I have last week filed another application (case CCT 161/16) in the public interest requesting the court to set aside the commission’s report‚ and to instruct the minister of finance to recover monies — now estimated at over R70-billion — that were irrationally and fraudulently spent on the arms deal.”

Crawford-Browne said that a huge volume of evidence against British Aerospace‚ the German Submarine Consortium and the German Frigate Consortium‚ “the very cause of commission’s creation‚ was left lying‚ uninvestigated‚ in two shipping containers at the Hawks’ premises in Pretoria”.

“Examination of other evidence was deliberately blocked by Judge Willie Seriti.”

He said that‚ as predicted back in the 1990s‚ the arms deal had unleashed a culture of corruption in the country. – TMG Digital