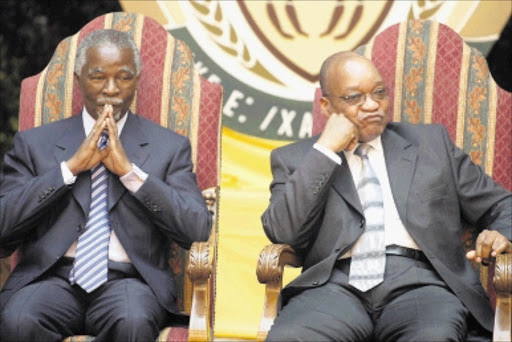 Former President Thabo Mbeki on Monday expressed frustration that even after the outcome of a judicial commission of inquiry into the arms deal‚ allegations of corruption continue to persist.

He said this was based on a “stereotype” that African governments were corrupt.

Mbeki addressed a media briefing at his foundation on illicit financial flows‚ after the findings of the Seriti Commission were made public last week.

2016 has marked Mbeki’s return to the public consciousness.

His weekly letters have made a comeback and he held a rare media briefing on Monday on his foundation’s activities over the next few months and on his work in combating illicit financial flows.

The findings of the commission headed by Judge Willie Seriti were lambasted by arms deal critics‚ who said they would seek legal advice on taking the commission’s report to court on review.

“It’s actually very upsetting because in the end after all these allegations there are no facts‚ but they (the allegations) are sustained over many years.

“For over a decade and a half even without one fact‚ they don’t hesitate to repeat there was corruption.”

The Seriti Commission’s terms of reference were very specific — it had to deal with the Strategic Procurement Defence Package — it did not relate to anything that might have happened between government and other suppliers‚ he said.

The inquiry dealt only with the “primary contracts”. He said the contracts between preferred bidders and sub contractors had “nothing to do with the government”.

Mbeki welcomed the news that arms deal critics were contemplating taking up the issue on review‚ “otherwise people without facts will continue to pop up saying there is corruption.”

“My view is that it would be very good if they do that‚ then they can go to court and present the information (they have)‚” he said.