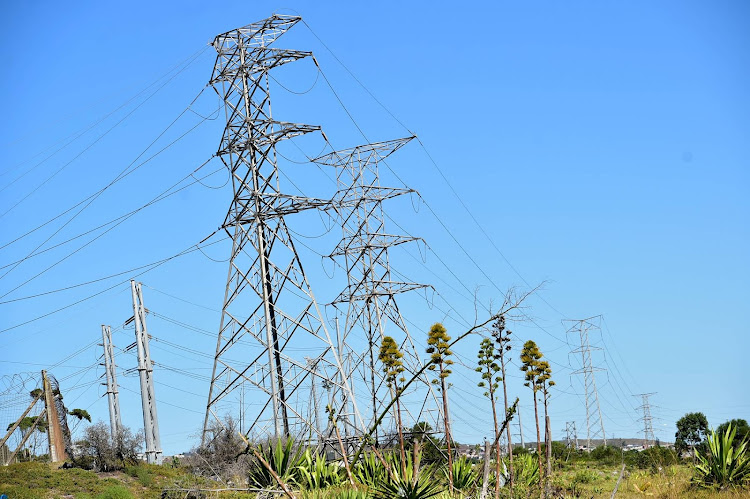 Eskom pays the third-highest average salary in SA — R785,557 a year — but is buckling under a R480bn debt pile and depends on government bailouts to keep the lights on and the economy functioning. File photo.
Image: EUGENE COETZEE

Wage negotiations at Eskom got off to a rocky start on Tuesday when the cash-strapped power utility rejected most of the unions’ demands and instead tabled proposals aimed at changing the conditions of service.

The National Union of Mineworkers (NUM), which represents most of Eskom’s 46,000-strong workforce, and the National Union of Metalworkers of SA (Numsa) are demanding a one-year 15% wage increase, which is above the 3.2% inflation rate recorded in March and higher than the 4.3% average the Reserve Bank expects for 2021.

Eskom pays the third-highest average salary in SA — R785,557 a year — but is buckling under a R480bn debt pile and depends on government bailouts to keep the lights on and the economy functioning. Ratings agencies have described Eskom as the single biggest risk to the SA economy.

In an 18-page document, which Business Day has seen, Eskom — one of many state-owned entities (SOEs) that have been hollowed out by years of corruption and malfeasance linked to state capture — dismissed most of the unions’ demands and tabled proposals it wants the unions to agree to before tabling an offer.

On the unions’ demand that the power utility “close the apartheid wage gap”, Eskom said while it remains committed to the principle and process to ensure “indefensible income differentials [are] addressed”, it is not in a position to address this at the moment as it “cannot afford this”.

Eskom said there is no justification for any increase in the housing allowance, which the NUM and Numsa want increased from R3,425 to R7,000 and R5,000, respectively.

It did not make sense that the standby allowance be increased from R97 per day to R500 as that equates to R873 per week and almost R4,000 per month, Eskom said.

Eskom also rejected Numsa’s demand that the SOE’s medical aid contribution be increased from 60% to 80% and instead tabled its proposals on changes to Eskom conditions of service.

The utility said when its employees are called to work outside normal working hours, a minimum payment of four hours is made, “irrespective [of whether] the time worked was less than four hours”. It proposes that payment be based on actual time worked at the applicable overtime rate.

Eskom also proposes that overtime hours worked be paid in the next payroll cycle after being processed and approved, instead of the current practice in which workers bank them for a year before cashing them in.

The utility also proposes that a fixed rate be implemented for any overtime worked on Sundays and public holidays, instead of paying double the applicable rate of pay. Eskom also proposes not to pay any transfer benefits if the transfer is initiated by an employee.

“Provided that the union[s] agree to all the proposed changes as per the Eskom conditions of service, and the Eskom response to the union-related demands, Eskom is not, at this stage, in a position to table a possible offer in terms of a percentage increase to basic salary as this is dependent [on] the union responses to the above,” the utility said.

In a communiqué to its members which Business Day has seen, NUM energy sector co-ordinator Khangela Baloyi lashed out at Eskom for going to the negotiations “guns blazing”, saying: “Our analysis of the first day of negotiations is that the employer wants to collapse the negotiations.”

He told NUM members that Eskom wants to “take the little benefits left in our conditions of service”.

“The battle line has been drawn. We are being provoked and we are being undermined. We need to devise a strategy to fight for our demands,” said Baloyi.

Two of the biggest labour unions at Eskom are pushing for a double-digit percentage wage increase, arguing that if there is money to burn diesel and ...
News
1 year ago

Eskom pledges to approach wage negotiations in good faith, pleads with unions to do the same

Eskom has announced that it will go into month-long regular wage talks with unions from Monday and has pledged to approach the talks in good faith.
News
1 year ago
Next Article