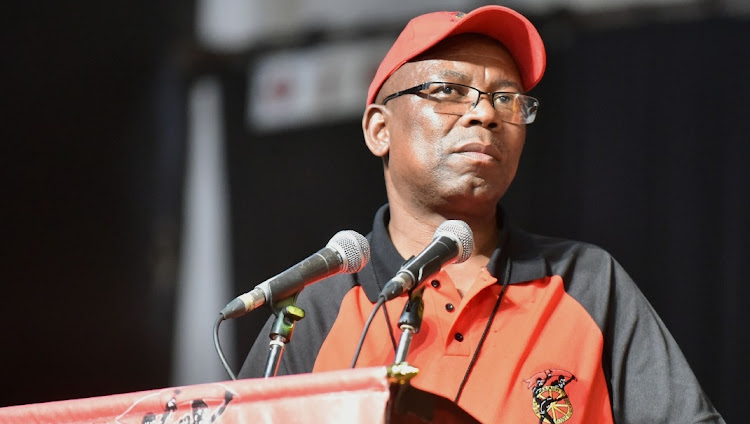 Key ANC ally the Congress of SA Trade Unions (Cosatu) says it intends to openly defy President Cyril Ramaphosa’s ban on mass gatherings of more than 100 people, saying it will support a planned national strike by its public sector affiliate over cuts to the public sector wage bill.

Cosatu general secretary Bheki Ntshalintshali, who attended a special executive council meeting of the National Economic Development and Labour Council (Nedlac), on Monday, said the federation will support the government and public entities union should it down tools and take to the street on March 30.

The National Economic Development and Labour Council met to discuss the economic and labour impact of the coronavirus along with mitigation measures to avoid the spread of the virus. Business Day TV caught up with Martin Kingston, the vice-president of Business Unity SA to talk about the decisions made.

“Whatever action [the National Education, Health and Allied Workers’ Union (Nehawu)] takes, we will support them,” Ntshalintshali said.

Ntshalintshali said Nehawu would have to “debate” the fact that going on a strike could potentially lead to more people being infected by the rapidly spreading virus that has been confirmed in more than 100 people in SA.

“They will look at all the risks but I think the message that they are sending is: they will not leave their rights just because government wants to confuse this thing with the Covid-19 [outbreak].”

'The impact on the economy is going to be quite devastating': Ramaphosa on coronavirus

President Cyril Ramaphosa says companies in financial distress will have to be helped by the government as part of its relief programme to minimise ...
News
1 year ago

Ntshalintshali said Nehawu, which is Cosatu’s largest affiliate, would have to plan the strike properly because “no person in their right mind” would want to fight for wages and in the process contract diseases. “They will have to plan that properly, but whatever decision the public sector [union] takes, we will support them,” he said.

On Sunday, Nehawu said it was “crystal clear” that the government has no intention of honouring the last leg of the three-year wage agreement signed in the public sector co-ordinating bargaining council in 2018.

The government has announced its plans to cut the public sector wage bill by more than R160bn over the next three years. Renegotiating the third year of the wage agreement is projected to cut R37.8bn from the wage bill, or just 1.5% in real terms, in 2020.

In the existing agreement, workers would receive an increase of consumer price inflation (CPI) plus 1%, and notch increments of about 1%.

Nehawu general secretary Zola Saphetha said they wanted to send a clear message that “there will be no negotiations on the current agreement as it exists”.

The union has directed all its national, provincial and regional structures to prepare for “a process of proper consultations with all our members and to start mobilising for a national day of action to take place on March 30 2020”.

“After the national day of action if the government continues with reneging on the current agreement we will be left no option but to embark on rolling mass action,” said Saphetha.

On Sunday Ramaphosa announced sweeping measures to contain the spread of disease, including travel restrictions on foreigners from hard-hit countries, a ban on gatherings of more than 100 people and the closure of schools.

We all must play part to defeat coronavirus

On Sunday, President Cyril Ramaphosa announced extraordinary measures in response to the outbreak of the coronavirus, which has wreaked havoc and ...
Opinion
1 year ago

In a media briefing following the Nedlac meeting on Monday, Ntshalintshali said the meeting discussed measures aimed at “saving lives and the economy”.

Meanwhile, the National Union of Mineworkers (NUM), which was scheduled to embark on a march to ANC headquarters Luthuli House on Friday, has called off the march, describing the move as a precautionary measure to try to prevent Covid-19 from spreading.

The NUM march was billed as a protest against the unbundling of Eskom into three units responsible for generation, transmission and distribution; the independent power producers; and against retrenchments in the mining, energy and construction sectors.

“There shall be no mass meetings or shaft/shop steward council meetings until the ban on meetings has been lifted by the state president ... It is against this background that the planned march to the ANC headquarters [at] Luthuli House has been postponed until further notice,”  NUM president Joseph Montisetse said on Monday.

Zion Christian Church (ZCC) has called a meeting with its members and health professionals on Saturday where they are expected to discuss issues ...
News
1 year ago

June school holidays will be shorter as schools close earlier for Easter holidays.
News
1 year ago

The Zion Christian Church (ZCC) called off all services relating to the popular Good Friday service pilgrimage.
News
1 year ago
Next Article