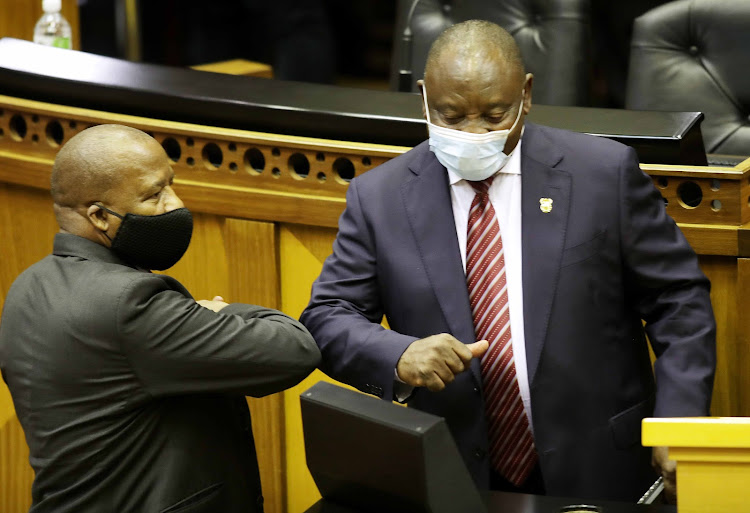 Opposition parties have moved swiftly to slam the economic reconstruction and economic recovery plan President Cyril Ramaphosa delivered at a joint sitting of parliament on Thursday.

Ramaphosa headed to parliament to present the plan in the wake of the devastating effects on the economy caused by the lockdown in reaction to the Covid-19 pandemic.

Part of his plan included job creation by focusing on infrastructure investment, re-industrialisation of the economy and acceleration of economic reforms, among other things.

He also made a promise to create 800,000 jobs, employment of teacher assistants and the extension of Covid-19 income grants by a further three months.

But opposition parties seemed underwhelmed by Ramaphosa's speech, with some saying the president's plans were not new and that he did go far enough in announcing reforms.

They were also sceptical about the government's ability to deliver on the plans.

DA leader John Steenhuisen criticised the government's plans to further fund SAA to the tune of R10bn, saying the money could be better used.

“I think what was missing was the urgency of these. South Africa does not need a plan for two years' time or three years' time, it needs a plan for now. We are in an economic crisis, we have massive unemployment and we need investment and growth,” said Steenhuisen.

He further criticised the job creation plan, which relied on the state. He questioned how the country could talk about cutting the wage bill while it promised to create jobs.

“I think it was a big missed opportunity. I think people were expecting bold reforms. I would have loved the president today to bring his reform agenda and slam it on the table and say, 'Let's pass this through this house',” said Steenhuisen.

LISTEN | All you need to know about Ramaphosa's Economic Recovery Plan​

Ramaphosa made the announcement in parliament on Thursday, where he tabled an “economic reconstruction and recovery plan” in response to the ...
News
1 year ago

UDM leader Bantu Holomisa said Ramaphosa, together with his predecessors, had made similar promises in the past but there was no implementation.

“The plan he has outlined is no different to what he has been telling us from the last three state of the nation addresses. Sometimes it's like a cut and paste from his previous speeches,” said Holomisa.

He said the most important thing to watch would be finance minister Tito Mboweni's speech, which would outline where the money for the plans would come from.

Freedom Front Plus leader Pieter Groenewald said Ramaphosa's speech was really disappointing and that the president didn't say anything new.

The South African government's plans to curb rising public debt are too ambitious, a team of local and international economic advisors to President ...
News
1 year ago

R350 'Covid grant' to be offered for an extra three months: Ramaphosa

The government has decided that the special R350 Covid-19 social grant will be offered for another three months as part of a new economic plan to ...
News
1 year ago
Next Article