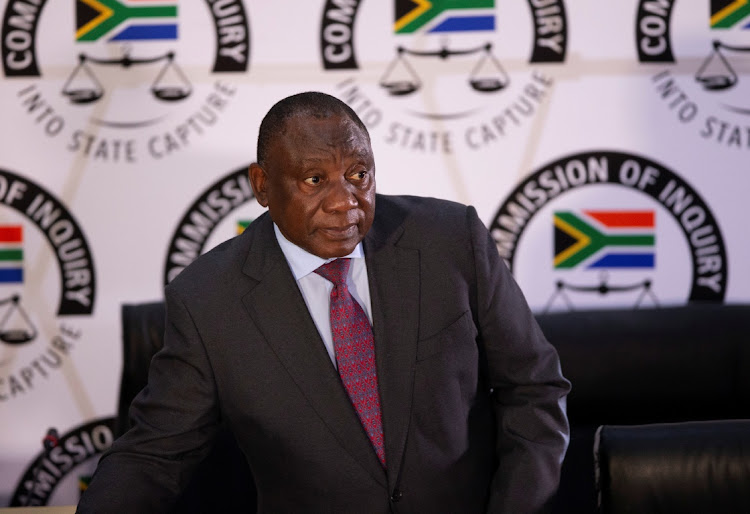 President Cyril Ramaphosa said the influence of the Guptas in the appointments of ministers and heads of state-owned entities under former president Jacob Zuma would have been a subversion of SA’s constitutional order if it were established to be true by the Zondo commission.

Ramaphosa was on Thursday testifying for the second day before the inquiry. His evidence was focused on what the ANC had known and done about the allegations of state capture and corruption over the years.

Ramaphosa had already told the inquiry that the ANC had failed to stop the rot and that it was unable to make excuses for itself on why it had for years not acted on allegations  within the party, or initiated investigations through parliament, as early as 2011 when reports of the hands of Guptas in the setting up of Zuma’s cabinet began to emerge.

When asked about the influence of the Guptas by evidence leader, advocate Alec Freund, Ramaphosa admitted that the alleged relationship between the Guptas and Zuma would have been the subversion of the country’s constitutional order.

“Our constitutional architecture is such that things like the appointment of ministers and deputy ministers should be the sole preserve of the president. There should be no one who goes around offering people positions like that,” said Ramaphosa.

He also told the commission that he had believed allegations and subsequent evidence by former finance deputy minister Mcebisi Jonas that he had been offered a ministerial post and a R600m bribe by the Guptas in 2015 if he did their bidding.

Ramaphosa said the balance of power within the ANC had disabled its leaders to promptly call for action on the allegations despite mounting reports from top party members and reports of the nefarious activities by the controversial family.

He launched an offensive charm on the media calling them patriotic for relentlessly exposing state capture despite the reluctance of the ANC to take action.

Freund, however, grilled Ramaphosa on why he did not use his two powerful positions as the leader of government business in parliament and as the chair of the ANC political committee, an oversight national structure that monitors the work of the ANC in parliament, to ensure that the legislature exercised its oversight role and probed the allegations.

Ramaphosa said his job as leader of government business had been less influential and more about coordinating the work and appearance of the executive in parliament.

He said the ANC political committee had wanted to “get to the bottom of this through the party structures”. This was despite Ramaphosa’s admission on his first day that the party had not internally resolved to probe the matter until 2017.

Ramaphosa’s testimony continues with a focus on the donations for his CR17 presidential campaign.

President Cyril Ramaphosa has told the Judicial Commission of Inquiry into Allegations of State Capture that the ANC had ignored some of the ...
News
2 weeks ago

It took the ANC six years before acknowledging the phenomenon of state capture and openly backing investigations into it despite reports of its ...
News
2 weeks ago
Next Article