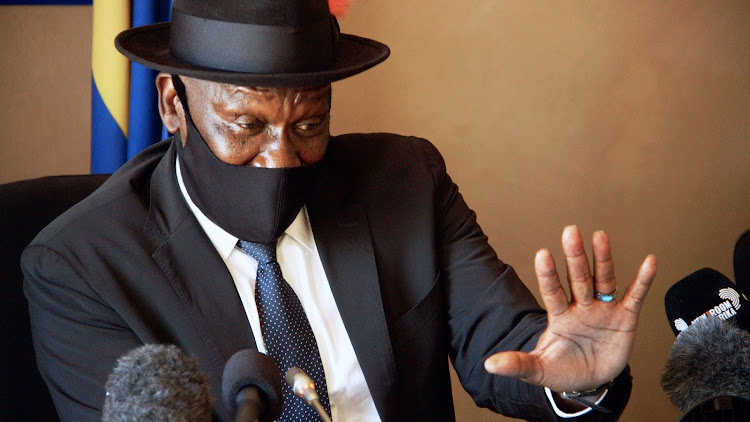 Police minister Bheki Cele warned extortion syndicates that "the big fish" were in his crosshairs during a briefing in Cape Town on Thursday.
Image: Anthony Molyneaux

Police minister Bheki Cele warned extortion syndicates that "the big fish" were in his crosshairs during a briefing in Cape Town on Thursday.

Cele was giving an update on the work done by the Western Cape extortion steering committee.

The committee is made up of national and provincial government representatives, the police, the City of Cape Town and businesses. It was established in September 2020 as a response to concerns raised by private individuals and businesses about being coerced into paying so-called "protection fees".

“The extortion looked like it was an elite crime problem as mainly nightclubs and bars were being targeted, but actually the extortionists were also going to townships like Khayelitsha to get percentages of rentals from the poorest of the poor,” said Cele.

“During lockdown the nightclubs were shut down, so the extortionists were going for eateries, restaurants and anyone they could intimate to get money from.

“But I’m very impressed in the way the committee worked together for the better of the province. I believe we will squash out extortionists with our unity.”

Asked if he believed the police were arresting the brains behind the rackets, he said: “We have arrested the foot soldiers but we are getting into the big fish now.”

On Wednesday a parade was held which saw Cele unveil 200 new police members for the province. The group included analysts and specialists who would join the fight against extortionists.

“If we are seen to be successful in arresting more extortionists, more people will come forward to report intimidation and extortion," said Cele.

The minister added that some police officers working with extortionists and gangsters had been arrested.

A seventeenth person alleged to have wrought terror as part of Cape Town’s nightclub turf war appeared in court on Tuesday.
News
1 year ago

Western Cape police say their efforts of clamping down on rising extortion in the province are starting to pay off with their latest arrest of three ...
News
1 year ago
Next Article