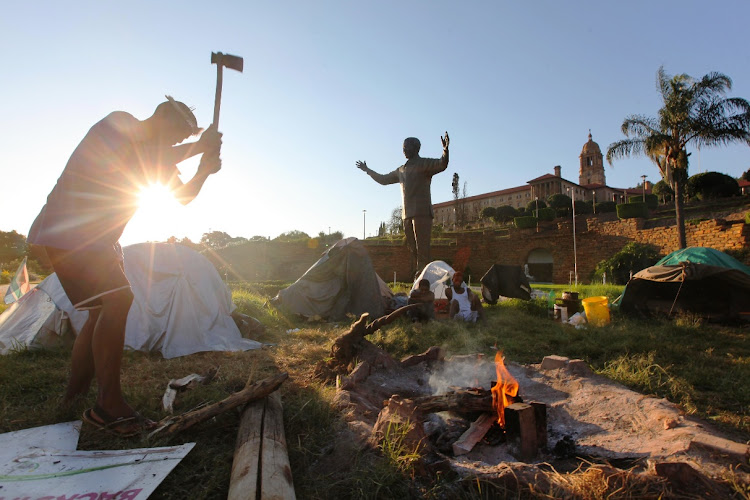 Khoi-San chief Shane Plaatjies on the lawns of the Union Buildings in Pretoria in April 2020.
Image: Alaister Russell

When you're asked about your race in this year's census, you'll have much more freedom than before about the way you answer.

“Stats SA has advised that the manner in which the question on race is posed will allow people to classify themselves in whichever group they identify with,” said co-operative governance minister Nkosazana Dlamini-Zuma.

The disclosure came in a written answer to a parliamentary question posed by DA MP Denis Joseph, who wanted to know about the government response to demands from a Khoi-San group camped at the Union Buildings for more than two years.

One of the demands was that they be recognised as Khoi-San rather than being classified as “coloured”, and that they be able to take part in October's census as Khoi-San.

As occupations gather pace landowners fear for their property

On an abandoned private farm south of Johannesburg, the sound of hammers bashing nails into corrugated iron, brooms sweeping away the dust and a ...
News
1 year ago

In her reply, Dlamini-Zuma said: “The group raised concerns with the usage of the word coloured as they deemed it offensive and derogatory. They therefore demanded that it be scrapped and replaced with what they regard as a more appropriate word to describe them, which is Khoi-San.

The census form filled in by every household would allow people who classify themselves as Khoi-San “to indicate that and be coded as such”, said Dlamini-Zuma.

The move follows a decision by the department of public service & administration to allow people applying for government jobs to identify their race as “other”, in addition to the usual choices of African, white, coloured and Indian.

In her reply to Joseph, Dlamini-Zuma said the Khoi-San group camped at the Union Buildings since late in 2018 had raised “complex matters which cannot be resolved overnight”, but she said “various departments have since been seized with them”.

In response to the demand that Khoi-San languages be introduced in all schools nationwide, Dlamini-Zuma said the Pan South African Language Board had done “groundbreaking work” which included “the development of a Khoekhoegowab Glossarium”.

The board was now developing rules for Nama spelling in order to train teachers “who will be able to educate children on the language and culture of the Khoi-San people”.

The minister added: “The San language is being gradually introduced in schools in the Northern Cape. The department of basic education, in preparation for introducing the Nama language in schools with speakers of the language, developed the grades 4-6 toolkit.”

Dlamini-Zuma said the Khoi-San demand for extension of the Traditional Courts Bill to include them had been received sympathetically.

The bill had been adopted last November by the parliamentary justice and security committee and defined a traditional court as “a customary institution or structure, which is constituted and functions in terms of customary law, for purposes of resolving disputes”.

The graves of Griqua leaders Adam Kok II and Adam Kok I were under consideration as heritage sites, said Dlamini-Zuma.

“The Khoi and San Heritage Route is a national legacy project whose implementation was approved by cabinet in June 2020. The route will identify, highlight, conserve, and promote the heritage of the Khoi, Nama, Griqua, Khorana and San.

“This project contributes towards the acknowledgment of the previously neglected and marginalised SA communities.”

Finally, Dlamini-Zuma pointed out that the Khoi-San group's request to rename Port Elizabeth airport after one of its leaders had been granted in February, when Chief Dawid Stuurman International Airport was unveiled.

SAHRC confirms probe into 'coloured' teacher who self-identified as 'African'

Is the official use of apartheid-era racial categories a human rights violation?
News
11 months ago

MEC intervenes in case of 'coloured' teacher identifying as 'African'

Western Cape education MEC Debbie Schäfer on Wednesday urgently requested information about the case of a teacher who faced possible dismissal for ...
News
11 months ago

'Coloured' teacher on fraud charge for saying he was 'African'