Sad to say goodbye to our king on TV, but we understand the rules of today, says loyal subject 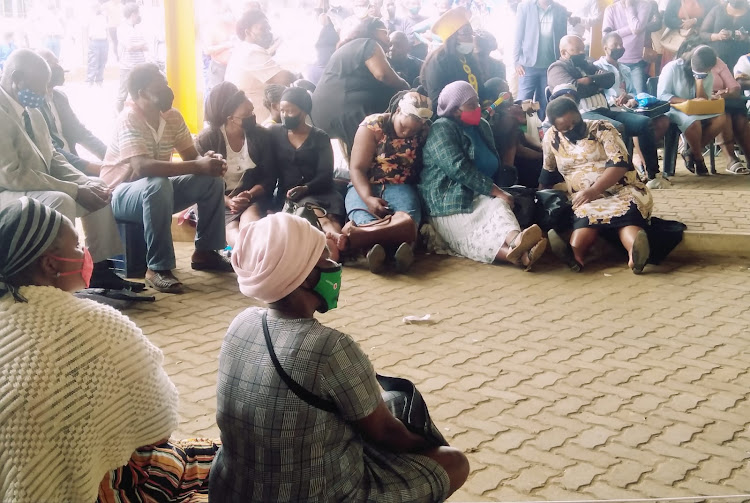 Scores of people sat on the floor at the Nongoma taxi rank where a public viewing site had been set up for the memorial service of King Goodwill Zwelithini.
Image: Mluleki Mdletshe

Some sat on the floor, others commandeered chairs and some stood on the pavement of the KwaNongoma taxi rank where a public viewing site had been arranged for people to watch King Goodwill Zwelithini's memorial service on Thursday.

The normally bustling rank was quiet as the crowd grew to watch the king's memorial service, which was broadcast on a screen live from the KwaKhethomthandayo royal palace. The Nongoma municipality set up three public viewing sites to discourage mourners from attending the royal palace where it would have been difficult to enforce social distancing protocols and adhere to regulations around gatherings.

One of those who was present at the taxi rank was Sicelo Mkhwanazi who told TimesLIVE that the nation was “weeping” at the loss of the longest-reigning Zulu monarch in history.

King Zwelithini died in a Durban hospital on Friday after Covid-19 related complications.

“We are all in mourning at KwaNongoma because the king lived among us. He would drive on this very road and greet everybody even inside the taxi rank.

“That made us very happy as the Zulu nation because we trusted him for his wisdom and his leadership.”

Mkwanazi's sentiments were echoed by Pastor Bhekizenzo Ndlela Matheni, who said that he has known about many kings in his life, but none would compare to King Goodwill Zwelithini.

The 66-year-old recalled fond memories of the king, whom he said had began inspiring the nation at a young age.

“It was at Hlophenkulu Primary where I studied and met him, but he was there years ahead of me. He shared classes with many older siblings of mine at the school.

In 1968, I was already a boy when his father passed on. And in 1971 Isilo was still at Bhekuzulu school then, but he had been called to duty and stand for his people. He had no fear of the big shoes to fill. That's when his reign began.

Like many, Ndlela admitted to struggling with accepting the king's passing, and couldn't hold his tears as he told TimesLIVE of his last meetings with the king.

“We met with him on a few occasions last year as the pastors of KwaNongoma, where he joked and laughed with all. There was no sign that he would be leaving so soon

As pastors we never stopped praying for his recovery, and learning of his death last week on the morning news was just heartbreaking because we were under the impression that he was making progress at the hospital, “said Ndlela.

Another mourner was 25-year-old Siyalo Shezi, who said it had “pained” him not to have attended the king's burial.

Shezi is a member of Kangaroo Zulu Dancers, a traditional dance group which occasionally performed for the king during ceremonies.

“We always hoped he would beat the hospital and come home to his family where we could dance for him once again. It is a sad one to watch on TV but we understand the rules of today,” said Shezi.

The privacy that surrounded parts of King Goodwill Zwelithini’s burial yesterday was normal protocol in how a king ought to be laid to rest as ...
News
10 months ago

The co-operative governance and traditional affairs department has placed disaster management teams on alert after a warning of severe weather.
News
10 months ago
Next Article