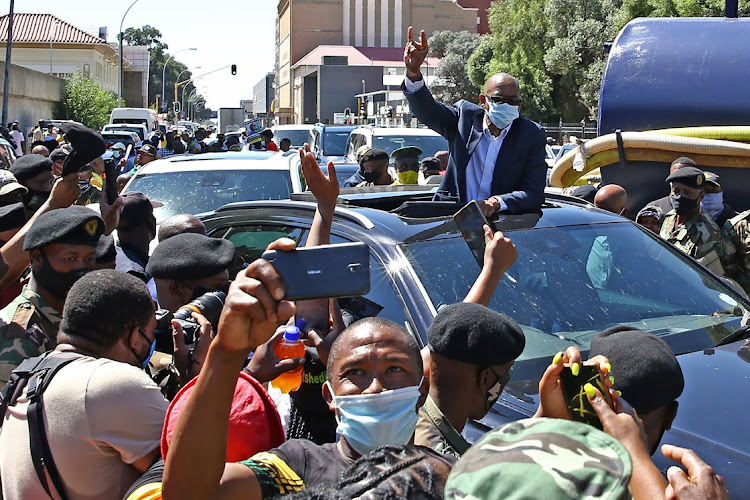 On the sidelines of ANC secretary-general Ace Magashule's court appearance on Friday, the ruling party's national executive committee (NEC) and SA's lockdown regulations were under fire.

Ex-convict Andile Lungisa took a swipe at the under-construction ANC “step aside” rule which has been the subject of ANC NEC factional wars since last year.

The rule, yet to be finalised, seeks to have ANC leaders charged with serious crimes, such as Magashule, vacate their positions until they are cleared.

Lungisa said an ANC rule could not trump the country's constitution, which afforded all accused the presumption of innocence until proven guilty.

“We must never allow any individual to undermine the constitution of the republic and want to revoke innocent until proven guilty,” said Lungisa.

By the end of Sunday, the ANC could be without a secretary-general - at least as far as the newly formulated "step aside" guidelines are concerned.
News
1 year ago

“If you are charged, you must be allowed to follow the process until its conclusion. There is no-one who can say if you are elected into the structures of the ANC, you must be taken out, you will be undermining the constitution of the country and the policy position of the ANC.”

According to Lekgoete, the country was “degenerating towards a dictatorship in the name of Covid-19" after he and many other ANC leaders were denied access to court owing to the lockdown restrictions.

The restrictions were applied inside court but outside the story was different with ANC leaders, members and supporters gathered in thousands at a public park in the city centre of Bloemfontein waiting to be addressed by Magashule.

This was despite Covid-19 adjusted lockdown level 3 regulations that ban political rallies altogether.

Magashule made his way to the park after a brief appearance in court but, on the advice of his lawyers, ended up making a U-turn and did not address his supporters.

By this time the political rally had been going on for hours.

After a caucus with other ANC leaders in Manguang to support him, Magashule elected to send Lungisa to deliver a brief address to the supporters who dispersed immediately afterwards.

Said Lungisa: “As I am speaking here, I am speaking observing the Covid regulations, that  is why I am requesting all comrades to close the programme without starting and for the reverends to give us a prayer.

“The secretary-general will never run away from you, he is not here because he respects the regulations. We highly appreciate your discipline.”

The ANC top six have decided that the newly formulated "step aside" regulations should go straight to the national executive committee (NEC) and not ...
News
1 year ago
Next Article