He is one of the 280,000 people who edit and share information on platform 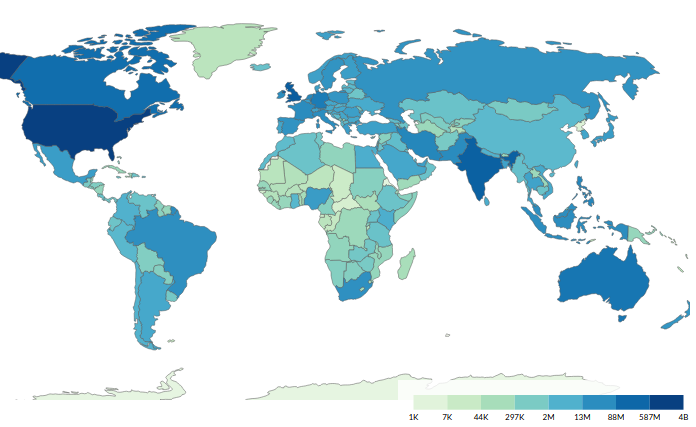 A map illustrating the monthly views of English language Wikipedia usage in different countries around the world for April 2020. The number for SA was 72 million.
Image: Wikipedia

SA editor Bobby Shabangu has been hailed by online encyclopedia service Wikipedia as it marks its 20th anniversary.

He is one of the 280,000 people who edit and share educational information on the platform for millions of users around the world each month.

Shabangu speaks five languages fluently, including English and Swati, which he mainly focuses on promoting.

According to the Wikimedia Foundation, Shabangu uses his multilingualism for “editing several language versions of Wikipedia, with a focus on promoting smaller languages such as Swati.

In addition to editing, Bobby also supports community engagement activities, which includes sharing input on a new universal code of conduct for all Wikimedia projects.”

One gatvol South African made clear his displeasure by altering the Wikipedia page for the chronically challenged Medupi power station.
News
2 years ago

“The strength of Wikimedia lies in its ability to crowdsource content and its quest to share that content freely. I think this has made a huge impact on the world,” he said.

Other contributors from the continent include Sandister Tei from Ghana and Sam Oyeyele from Nigeria.

Tei joined the platform in 2012 and is the 2020 Wikimedian of the year, an award that recognises the platform's outstanding contributors.

Since joining the free encyclopedia, she has trained and recruited new volunteers and helped found Ghana's fist Wikimedia community.

“Wikipedia is more than an encyclopedia. It extends to sister projects, global editor and volunteer communities, a foundation, multidisciplinary and multicultural project opportunities. It can be plugged into various partnerships, it gives a basis for advocacy — it's a galaxy,” she said.

Norma Gigaba, this is a fight to win smart not violently

According to Wikipedia, "humiliation is the degradation of pride which creates shame or leads to a state of being humbled or reduced to lowliness or ...
Opinion
1 year ago

Time to improve your finances
Business
3 years ago

The move is a nod to Madiba’s centennial celebration and an annual Wikimania conference under way in Cape Town.
Lifestyle
3 years ago
Next Article