An activist with real strength 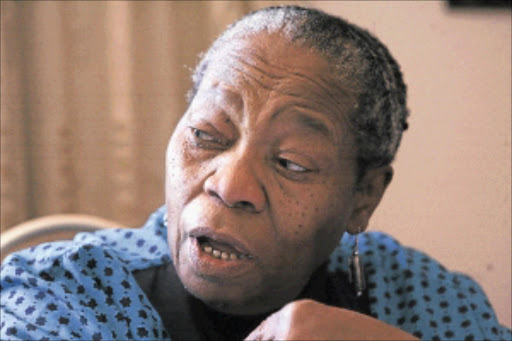 MOTLALEPULE Chabaku, who was both a teacher and church minister, packed a lot of living into her 78 years.

Chabaku, pictured, died in her sleep at her home in Rockville, Soweto, last Friday.

Born into a very poor family in Newclare, Johannesburg, Chabaku developed an illness that damaged her vocal cords, giving her a perfect bass for her singing career.

Chabaku joined the ANC in 1949 at the age of 15. She was part of the leadership that organised the 1956 women's anti-pass march to the Union Buildings.

While at Western High School in Western Township, Chabaku was Transvaal high jump champion and a shot-put star. On leaving school, she became part of a quartet that were the curtain-raisers for the popular 1950s singing group the Manhattan Brothers.

Showing an entrepreneurial bent from an early age, Chabaku used to collect used exercise books from privileged schools, tore out the clean pages, glued them together and resold them.

Chabaku later trained as a teacher and after graduating, taught for a while before leaving for the United Kingdom, where she attained two diplomas at the Royal Academy of Dramatic Arts and Roseneath College.

Back home, she ran the youth club services at the Non-European Affairs Department of the then Johannesburg City Council for 11 years before joining the late Reverend Dr Beyers Naude at the Christian Institute.

In 1964, a cultural exchange programme to the US became an extended stay that saw her earn not only a masters degree in Divinity but also a masters in adult education, guidance and counselling.

While studying speech and drama in the UK, Chabaku stayed at the country residence of former British prime minister Sir Winston Churchill.

At the urging of the late ANC president Oliver Tambo, Chabaku returned to South Africa in 1991 and worked as resident minister at a church in Bloemfontein.

In 1994 she was appointed the first speaker of the Free Sate legislature. In 1999 she was appointed to the National Council of Provinces. In 2004, she became a member of the Gauteng legislature served and on several committees, including housing, social development and gender, youth and people with disabilities.

Chabaku has served as national secretary of the ANC Women's League and a member of the national executive committee of the ANC Youth League.

"Reverend Motlalepula forgot to marry but had great respect for the institution of marriage and dearly loved children," said a close friend and comrade.

During the 1980s, she raised an abandoned baby girl, Mamolemo, who now lives in the US with her three teenage sons.

As an activist, Chabaku was known for her strength, strong sense of community and compassion.

Her funeral service will be held at Elkah Stadium in Rockville tomorrow.