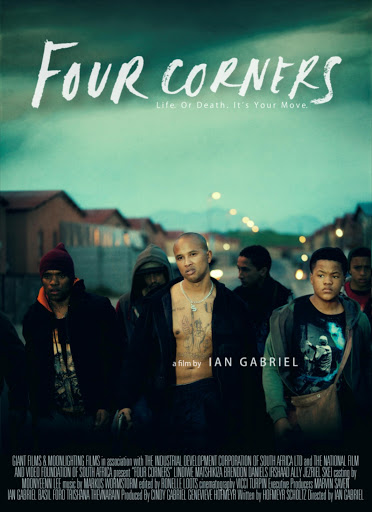 Four Corners, gets the official thumbs up following its premiere in Los Angeles last Sunday.

The South African edgy crime thriller bagged an official entry into the 2014 Academy Awards to represent South Africa in the Foreign Language category.

Ian Gabriel, Director the movie of says he is “overwhelmed” by Hollywood's positive response.

The premiere was attended by Industry VIPs including a clutch of influential Hollywood executives.

South Africa's former Oscar winner in the foreign language category, Gavin Hood, (Tsotsi) lent his support by officially introducing the film at the packed to capacity event. After the screening, he commented “The dedication of the entire cast and crew to the telling of the story, and their deep empathy for the characters they are portraying, shines through and moved many viewers to tears.”

Gabriel reported that audience members were visibly moved and that many expressed high hopes for the film's success in the Oscar race. “One can never predict if a movie will become a contender in this competitive race, but the response was enthusiastic and emotional,” said Gabriel.

The filmmakers arranged for South African actor, Brendon Daniels (who plays the lead role of “Farakhan”) to participate at the event: “Making Four Corners was a chance for me to work with a company of committed actors, some professional, some non-actors. There is no better reward for a director.” acknowledges Ian Gabriel, whose cast combines veterans including Lindiwe Matshikiza (who delivered a powerful rendering as Zindzi Mandela in Mandela: Long Walk to Freedom), beginners and ‘real people' non-actors, and includes several first time teenage actors, drawn from schools, chess clubs and communities across the Cape Flats.

In its first critical review, Indiewire's Carlos Aquilar enthused about the film calling it “utterly authentic and marvelously directed. Extraordinary performances reveal an unknown world of survival with gripping intensity”.

Four Corners is Gabriel's second feature film following the critically acclaimed Forgiveness. In his true to life, hard-hitting drama - set in the gritty urban reality of the Cape ganglands - the Four Corners filmmaker unapologetically gets a grip on the harsh realities of a unique and volatile gangland sub-culture, but at the center of the narrative is a vital message of inspiration and possibility. Described as a story of family lost, and family regained, producer Cindy Gabriel outlines the relevance of making a movie about a marginalized community. “It's a story of hope that focuses on the choices a young boy must make as he's coming of age in tough circumstances.”

Wikipedia: Four Corners is the first film to be told in a blend of Sabela ( the secret language of the Number Gangs) Tsotsi taal, Cape Afrikaans and the Cape English dialect. Filmed over 5 short weeks on location in areas often perceived as no-go venues for media and for the police, the film features 60 speaking parts, with many of the actors and bit players drawn from a pool of real people and actors all familiar with life on the Flats in the various gang associated areas where filming took place.

With the exception of the lead supporting actor Farakhan ( Brendon Daniels) and the lead actor Ricardo ( Jezriel Skei ) all the prison cast (youths and adults) were cast either from Victory Outreach, an outreach rehabilitative programme for ex -gang and drug users, and the Ottery Reformatory where actual juvenile offenders played the juvenile quad scene.

The teen and pre-teen actors chosen from thousands of hopefuls at school and chess club casting sessions are all first time film actors including the lead played by 13 year old Jezriel Skei from Johannesburg.