Steve Biko Hospital bursting at the seams on Covid-19 surge 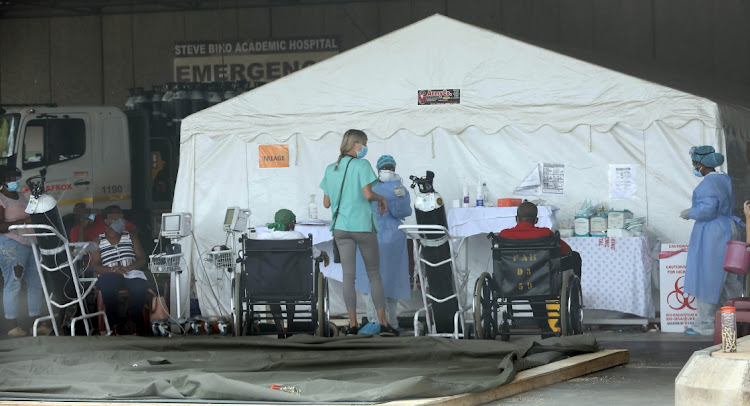 Steve Biko Academic Hospital in Pretoria is full to capacity with a sharp increase in the number of covid-19 patients.
Image: Antonio Muchave

The fast rising numbers of Covid-19 patients needing critical care in Gauteng have put one of the province’s biggest hospitals under severe strain – leaving health workers frantic and overwhelmed.

The situation at the Steve Biko Academic Hospital in Pretoria is so dire that not only has it run out beds to accommodate the increasing number of critical patients who arrive in groups, according to authorities, but also its overflow tent next to the casualty wards has filled up. Some of the patients could be seen being attended to outside the tent in an open area with oxygen tubes next to their beds.

The medical teams at the hospital are said to be fighting a losing battle as patient numbers increase exponentially daily. At least two more tents were being erected yesterday to accommodate the growing number of patients seeking medical attention.

The hospital management last week cancelled all leave for senior nursing and medical staff in an effort to deal with overcrowding.

A nurse who spoke on condition of anonymity said it had been a traumatising two weeks at the hospital as people had been “dying like flies”.

“To be honest, if I had enough money I would take a two-month unpaid leave because it’s traumatising seeing people dying like flies,” the nurse said.

“I am so scared right now.”

After pictures of the overflowing facility surfaced on social media at the weekend, the Gauteng health department confirmed that it had been experiencing a sharp increase in the number of Covid-19 patients since December.

Kwara Kekana, spokesperson for the Gauteng health MEC, said the hospital, which was converted last year to exclusively deal with Covid-19, had been experiencing a “sharp increase in the number of Covid-19 patients“ – with some patients coming from private facilities – because of a lack of space. She said some patients were self-referred from other provinces such as North West, Mpumalanga and Limpopo.

She confirmed that two new tent structures were being erected to accommodate the increase in the number of patients.

A general worker at the hospital told Sowetan that the tent had been converted from being a waiting area into a full temporary ward, with air-conditioners and heaters installed since early last month.

“After all wards were full since early December, the white tent became more of a ward and no longer a waiting area because there was nowhere people in the waiting area could be taken to,” the general worker said.

Another employee said the worst days had occurred two weeks ago. “Everything just filled up, there were no beds available. Even the mortuary was too full, there was no space for those who died. We are scared, coming to work has become hard,” he said.

The head of the Gauteng health department, Lesiba Malotana, yesterday called an emergency meeting to discuss bed availability in the province and to put a plan in place for the sharing resources.

The Gauteng health department converted Tshwane District Hospital into a strictly Covid-19 treating facility in partnership with the Steve Biko hospital, transforming the two hospitals into a complex.

“The complex is currently under pressure, especially with regard to the patients that require specialist, immediate attention and therefore can be treated only in certain hospitals, which are also overwhelmed,” said Kekana.

By Saturday the total number of Covid cases in Gauteng was  328,925 with  6,142 deaths having been recorded.

Medical experts have urged government to enforce the current regulations as this is the only tool that the state has to arrest the spike in daily ...
News
8 months ago

Six patients died when their oxygen supply was interrupted at Shifa Private Hospital on Saturday.
News
8 months ago
Next Article