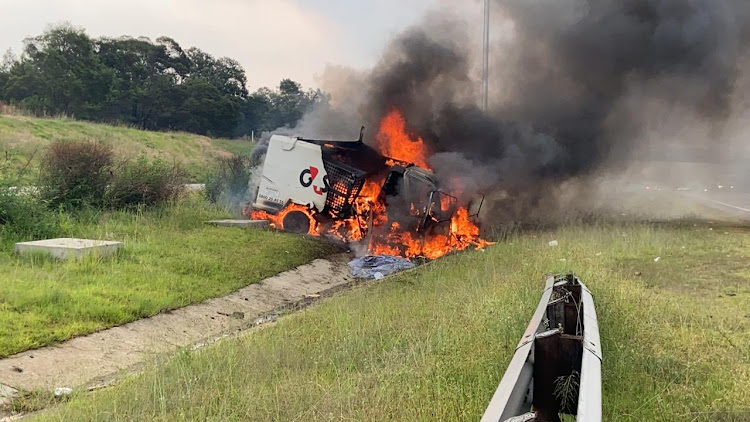 Police said the heist was similar to one carried out a day earlier.
Image: Yusuf Abramjee/Twitter

It is possible that the same people who carried out a heist in Pretoria on Tuesday struck again near Soweto on Wednesday.

“What is concerning is that we are noticing similarities or tactics that were employed in Tuesday's [heist] in Pretoria where a Mercedes-Benz SUV rammed into the cash van causing it to come to a halt. [In] today’s incident, the same transpired where a Mercedes-Benz vehicle rammed into the vehicle, the guards were ordered out, disarmed and both the cash van and the vehicle that rammed into it were bombed,” said Col Athlenda Mathe.

She would not confirm whether any cash was taken in the latest heist on the N12/M1 split towards Krugersdorp.

“A multidisciplinary team is combing the scene of crime trying to establish whether money was taken from the cash van,” Mathe said.

“We are on a manhunt for a group of suspects who fled the scene in a black Range Rover and white Nissan X-Trail. We are appealing to members of the public who may have information to come forward and assist investigations,” she said.

It was reported that the group caused chaos as they fled the scene.

Eyewitnesses told radio 702 that motorists were driving away from the scene, in the wrong direction on the highway.

Meanwhile, police held a meeting with role players in the cash transport industry on Wednesday.

“The intention of the provincial commissioner with this engagement was to urgently address the recent upsurge in the number of [heist] incidents in the province, and to subsequently strengthen relations and enhance co-operation between the SAPS and the industry,” said Peters.

“Comparing the rate of occurrence of incidents this year to last year's rate, Lt-Gen Mawela confirmed that there is a worrying spike in the rate of incidents of cash-in-transit robberies in Gauteng and that urgent intervention and attention is required from all stakeholders,” Peters added.

It was revealed at the meeting that Fidelity and G4S had been hit hard.

“General Mawela commended the industry partners for the establishment of Citasa [Cash-in-Transit Association of South Africa] and the subsequent rollout of a state-of-the-art operational command centre where the SAPS will be represented and have access to shared services and technologies that will enhance efforts to flatten the spike in relation to cash-in-transit robberies,” said Peters.

Mawela said CIT heists led to a web of other crimes.

“One CIT robbery may result in additional crimes being recorded such as malicious damage to property relating to the armoured vehicle, attempted murder and murder, robbery of the money, hijacking for suspects’ getaway, and other crimes.

“If we want to make a positive impact and mitigate this emerging urban terror, we will need to work hard on building a value-driven relationship, with operational plans that are more proactive rather than reactive,” he added.