G4S vehicle blown up during cash-in-transit heist near Pretoria 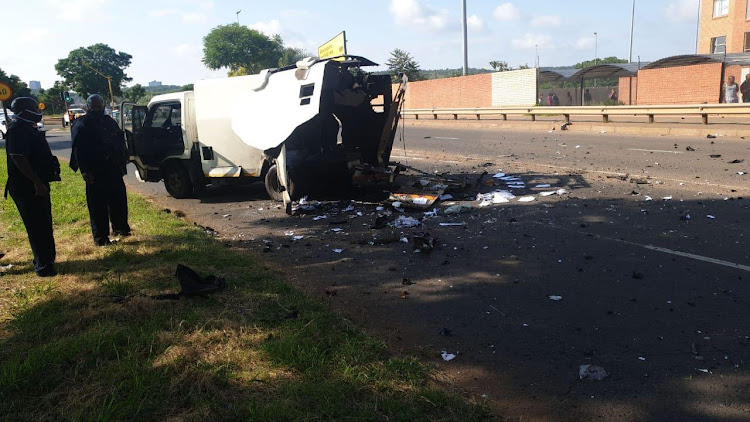 The cash van was damaged by an explosion after being rammed.
Image: Yusuf Abramjee/Twitter

The police are searching for about 15 people suspected to be involved in a cash-in-transit robbery on Paul Kruger Street in Wonderboom, Pretoria, on Tuesday.

National police spokesperson Col Athlenda Mathe said a Mercedes-Benz SUV rammed into the cash van, causing it to stop, at about 7.50am.

Three G4S security officials were forced out of the vehicle and had their service pistols taken.

"The suspects then attacked the cash van with explosives, causing it to explode," Mathe said.

While the robbers were still on the scene, more security officials arrived and there was a shootout in the street.

The suspects fled the scene in a number of vehicles.

"Investigations are continuing to determine whether money was taken during the cash-in-transit heist," said Mathe.

She said while combing the scene, the police discovered a grey BMW abandoned at a nearby property.

"It’s believed the vehicle had been used as a getaway vehicle. The vehicle was stolen during a hijacking incident in Lyttelton [Centurion] earlier this year," said Mathe.

A Fidelity security guard and a bystander were shot and wounded during a cash-in-transit heist in Evaton, south of Johannesburg, on Monday.
News
1 year ago

A family of three and an 85-year-old man were killed in two separate farm attacks in KwaZulu-Natal in the past week.
News
1 year ago
Next Article