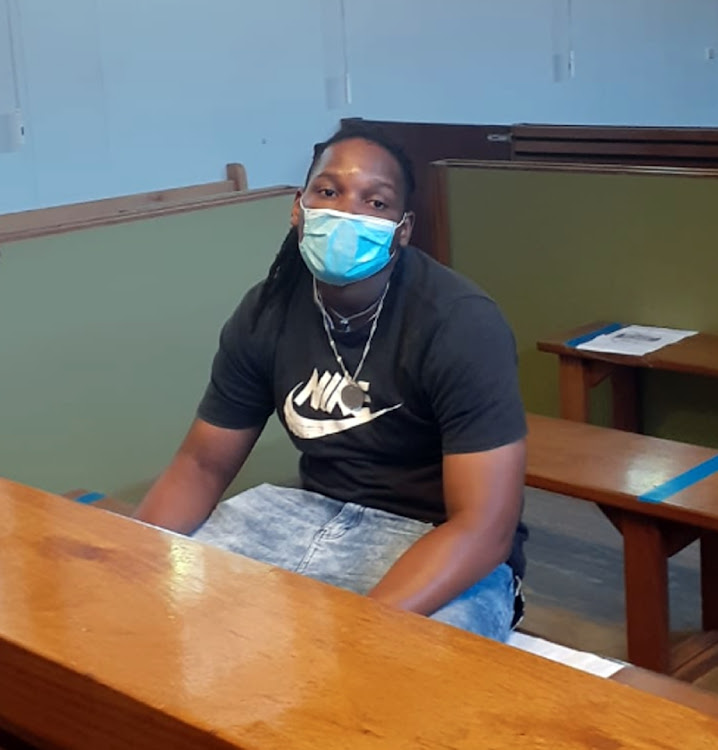 Killer dad,Ivan Mahlangu will spend the rest of his life in jail after murdering his three month old baby, Nkanyiso Mtshweni in January.
Image: PROMISE MARUPENG

Ivan Mahlangu, the man dubbed 'the Killer dad', has been sentenced to life imprisonment for killing his three month old daughter.

Judge Thandoluhle Mankge on Friday handed Mahlangu the lengthy sentence at the Delmas High court, after he was found guilty on Tuesday. He was also found guilty for the assault of the mother of the deceased child, Pearl Mtshweni (22).

Mankge said the sentence would be an example to other men who continue to perpetrate gender based violence against women and children. "The accused did not show remorse and he always maintained his innocence. He also failed to explain to the court why he committed the crime," said Mankge.

Mahlangu pulled yet another stunt during the mitigating stage, telling the court that he doubts baby Nkanyiso was his child. He said the child could not have been his because the mother did not put the name he gave her on the baby's birth certificate.

"I am also shocked that he has another child who is four years-old, whose exact age he does not know. It means the accused does not care about his children", she said. While handing out the sentence, she said he disgustingly chose to deny the child, after killing her and leaving the mother scarred for life.

"The accused made watch him while he killed the baby. He also failed to stop even though the mother begged him not to kill the child. He never cared about the life of both the child and mother," said Mankge.

A 27-year-old man dubbed "killer dad" has been found guilty of the assault and murder of his three-month-old baby, whom he allegedly sacrificed ...
News
1 year ago

Mankge said Mahlangu's behavior made it very hard for the court to come up with a shorter sentence.

"It is now difficult for the mother to live a normal life after he also blamed her for the death of the child", she said.

"This was the most shocking deed a parent can do to his own child. He caused trauma to the other parent as she is now going through therapy".

Mankge said the sentence should be harsh to deter such attacks from happening.  She said Mahlangu's health and state of mind should have no bearing on his sentence.

Mahlangu killed the baby in January at his rented house in Section C, Kwamhlanga. He persuaded the mother to come with the baby to accompany him to work as he did not have transport.

He then used a broken bottle to cut baby Nkanyiso's throat. He then tried to blame the murder on the baby's mother, saying she exhibited 'demonic behaviour'. The community of Delmas expressed relief at the sentence.

Noose tightens on man accused of killing his baby

A man accused of killing his  two-month-old baby has been labelled a blatant liar who wanted to shift the blame to his child's mother.
News
1 year ago

All parties agreed on Thursday as a judge was yet to be assigned to the matter and they were expected to file heads of arguments on Wednesday.
News
2 years ago

Lucas Phasha, the man who allegedly killed his four children, was previously convicted of murder.
News
2 years ago
Next Article