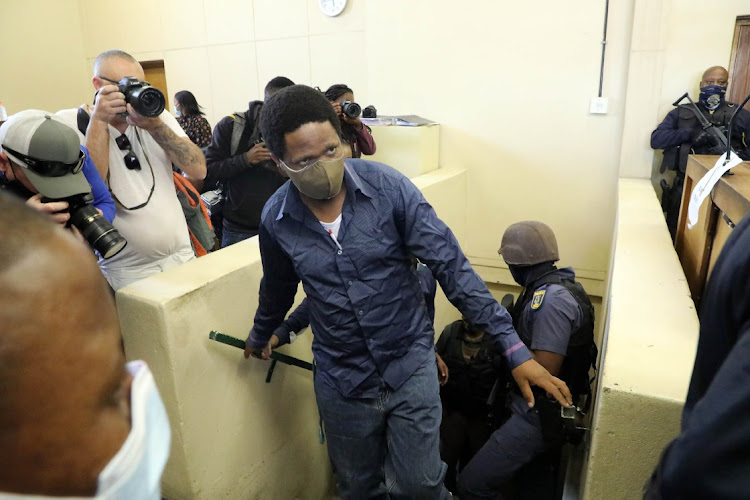 The five men implicated in Senzo Meyiwa's killing are back in court on Friday.
Image: ANTONIO MUCHAVE

The case against the five men implicated in the murder of soccer star Senzo Meyiwa is set to continue in the Boksburg magistrate’s court amid tight security on Friday.

Present in court for the suspects' second appearance were Meyiwa’s three siblings, Sifiso, Nhlanhla and Zama. They arrived in court alongside representatives of AfriForum, which had pushed for action from police in continuing their investigations of the case.

The female siblings of the late soccer star wore T-shirts bearing a picture of the Bafana Bafana and Orlando Pirates goalie.

.@afriforum, #GerrieNel & I are in court today to support Sifiso, Zama and Ndlandla Meyiwa (brother and 2 sisters of the late #SenzoMeyiwa). Today is the second court appearance of the accused. We will apply pressure to ensure that next time we also see the mastermind in the dock pic.twitter.com/gkJhaM8dxU

They were reportedly charged for Meyiwa’s killing in October, exactly six years after the Bafana Bafana star was shot dead, allegedly at the home of his girlfriend Kelly Khumalo in Vosloorus, Ekurhuleni.

During the last court proceedings, the five accused, appearing in court for the first time, refused to enter the dock, insisting they had nothing to do with the Bafana Bafana captain’s murder.

They claimed they were being used as a scapegoat for the wealthy.

It was reported at the time that police were yet to arrest the mastermind behind the killing.

Gerrie Nel of AfriForum's private prosecution unit said: “It would be interesting to see what the state will do today. The last time they said they would serve an indictment on the accused. I would be disappointed if the mastermind is not appearing today.”

Nel said he had held discussions with the police where he found out that they had an “even stronger case against the mastermind”.

While the mastermind was yet to be revealed, there was twist in the last appearance after the National Prosecuting Authority (NPA) leaked a document which was apparently intended for the investigating officer in the case, Col Bongani Gininda.

The document essentially revealed that the police had their eye on Khumalo as a person of interest in the case.

The document contained the following instructions: “Cellphone records of Ms Kelly Khumalo indicating her communication with the accused must be obtained, as previously indicated.”

Other requests the NPA made to the police in the document, which do not relate to Khumalo, include that:

It further called for the outstanding DNA reports from some of the suspects to be obtained.

Police have confirmed the death of a witness in the Senzo Meyiwa murder investigation, but said it would not jeopardise the outcome of the case.
News
1 year ago

The five men accused of killing Senzo Meyiwa caused a spectacle in court yesterday when they refused to step into the dock, refused legal ...
News
1 year ago
Next Article