Complaints of 1m pages in docket 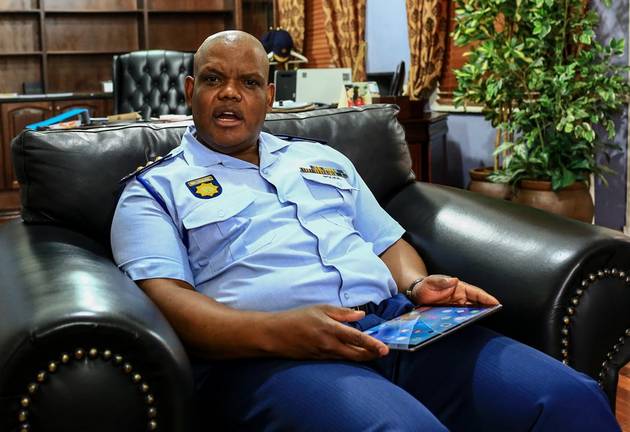 A lawyer for former acting national police commissioner Khomotso Phahlane on Monday argued the case should be struck off the court roll.
Image: SIMPHIWE NKWALI

Lawyers representing former top cops embroiled in the multimillion-rand blue lights fraud case have requested the court to strike the matter off the roll as they believe the state is ill-prepared to proceed with the trial.

The lawyers who are representing 12 suspects, including former acting national police commissioner Khomotso Phahlane, recently fired deputy national commissioner Bonang Mgwenya, and former Gauteng provincial commissioner Deliwe de Lange, argued that the state set a trial date but was not prepared to proceed with the matter.

The group is facing charges of fraud, theft, and obstructing or defeating the course of justice in relation to a R191m tender awarded to a private company to install emergency warning lights on police vehicles.

The trial was set to start yesterday in the Johannesburg Specialised Commercial Crimes Court sitting at the Palm Ridge magistrate's court but hit a snag when the lawyers of most of the accused submitted two applications requesting the matter be struck off the roll or for magistrate E Magampa to issue a permanent stay of prosecution.

Manthata’s lawyer, adv Lawrence Hodes, told the court they were disadvantaged because the large volume of documents contained in the docket disclosed to them consisted of over one million pages.

He argued that they were refused a pretrial conference which is a prerequisite in a matter of this nature to narrow down the charges on the charge sheet.

“Something is amiss because the state added [Mgwenya] and removed people [Pillay] and [is] adding evidence. If there was a raid, it needed to be disclosed so the prosecutor has an obligation to explain why the search and seizure took place.”

Hodes accused the state of engineering a postponement in a bid to prevent the matter from being struck off the roll which he labelled as “devious”.

“He’s riding over all the constitutional rights of the accused by not allowing them to prepare for the trial by disclosing information they needed. As drastic as our request is, we request for the matter to be struck off the roll or grant a permanent stay of prosecution,” Hodes said.

Keilin Muthray, representing Mokwena and Ramanjalum, said they requested the state to inform them about the status of the case after numerous postponements since 2018.

“After a year-and-a-half of investigations they decided they were ready for trial... In July, the docket was given to us by way of a four terabyte hard drive containing over a million pages,” Muthray said.

Muthray said search and seizure operations were conducted on the premises of Phahlane and De Lange on October 12 where electronic devices and documents were seized.

But, the prosecutor, Tilas Chabalala, retorted by saying that it was not his duty to inform the lawyers which aspects in the docket were specific to their clients.

“There is no duty on the state to tell them which parts of the docket to study. This is not an examination preparation, it’s a trial. It’s clear those seeking help are frustrated by the nature and complexity of this case,” he said.

The matter was postponed to November 24 to allow the state to respond to the application.

Deputy police commissioner Bonang Mgwenya has been granted R20,000 bail after being arrested in connection with a 2017 multimillion-rand tender ...
News
7 months ago
Next Article