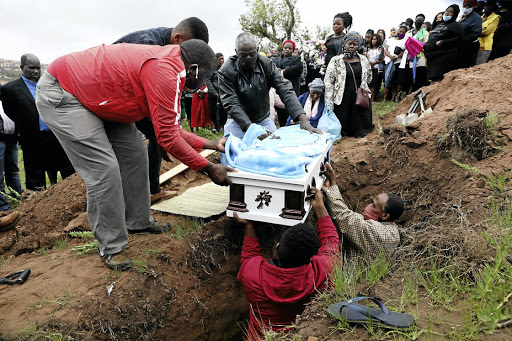 Mourners lower the coffin of rape/murder victim Sanelisiwe Mhlongo, 4, into her grave in KwaMashu. An uncle age 15 has been arrested in connection with the crime.
Image: Sandile Ndlovu

The 15-year-old KwaMashu boy accused of the rape and murder of his four-year-old niece has been sent for psychiatric evaluation.

National Prosecuting Authority spokesperson Natasha Kara said the matter before the Ntuzuma magistrate’s court on Wednesday was postponed for the boy to be sent for evaluation.

The grade 9 pupil was arrested on Tuesday after Sanelisiwe Mhlongo’s naked body was found with stab wounds in dense vegetation behind her home in KwaMashu. The body was found on Heritage Day after she had been reported missing the previous day.

According to relatives, she had been left in the care of an older uncle who in turn entrusted her into the care of the teenager.

The Mhlongo family were reeling after the arrest of the boy.

“What we need to look at is where his place in society will be because he has created a bad situation for everyone. It’s very painful because how will we take him in if the state is unable? We will accept it if the government says they will keep him — wherever they keep him — because there is no place for him here,” said relative Munth’kabongwa Mhlongo.

At the funeral on Friday the boy’s mother told the Sunday Times that her son was a quiet and neat person who recently began behaving suspiciously. But she did not know if he was drinking or taking drugs. She alleged that he had made a confession to police in the family’s presence.

The matter will be back in court on October 9.

Two men have been arrested in connection with the murder of a Free State farm manager, whose body was found tied to a pole on Friday.
News
1 year ago

The body of a 28-year-old man has been found riddled with bullets at a farm near Groblersdal.
News
1 year ago
Next Article