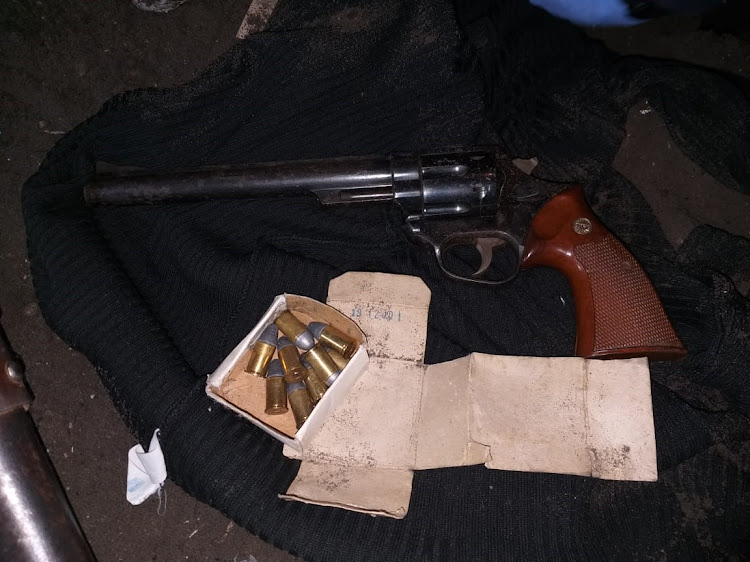 Officers found a firearm and ammunition buried in the ground in Robinvale, Atlantis.
Image: SAPS

Western Cape police have confiscated drugs, a firearm and ammunition and arrested several suspects linked to organised gangs on the Cape Flats.

Potelwa said seven suspects between the ages of 18 and 49 were arrested in Malmesbury and Mandrax tablets and crystal meth to the value of R4,100 were seized.

The seven suspects are allegedly linked to organised gangs on the Cape Flats, Potelwa said. They were charged with dealing in drugs.

Later on Friday evening, officers found a firearm and ammunition buried in the ground in Robinvale, Atlantis.

The firearm was reportedly stolen in Durbanville in 2019.

A total of 300 Mandrax tablets, dagga and a mobile card device were seized during the operation.

A 53-year-old man was arrested.

All arrested suspects will appear in court on Monday.

Two police officers who stand accused of killing 16-year-old Nateniel Julies are expected to appear in the Protea magistrate's court on Monday.
Pic of The Day
1 year ago

Western Cape murders down by a quarter during lockdown

The Western Cape government is celebrating a 27.4% drop in the provincial murder rate between April and June.
News
1 year ago
Next Article