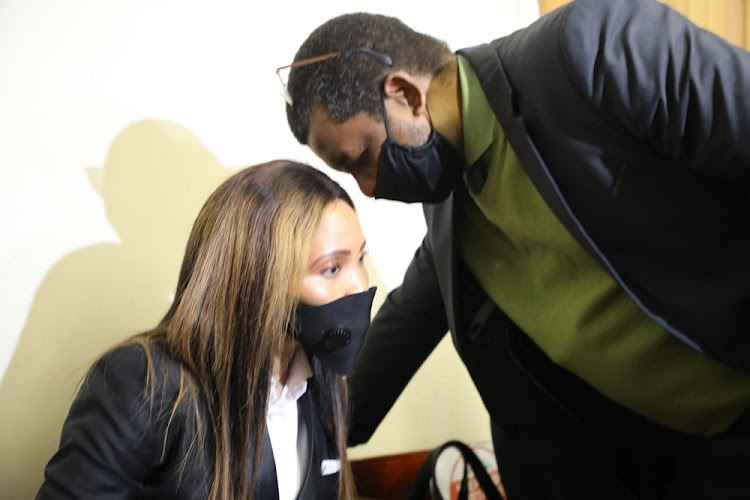 Norma Gigaba, the wife of former Finance Minister Malusi Gigaba was left traumatised after spending a ''winter night" behind bars.

Her legal representative, Victor Nkwatshu told media gathered outside the Hatfield magistrates court that his client was still dealing with trauma after her arrest on Friday night.

Gigaba was on Monday charged with malicious damage to property and crimen injuria after she allegedly badly damaged a Mercedes-Benz G-Wagon belonging to Malusi Gigaba's friend, trade unionist Peterson Siyaya.

“She is a bit traumatised because she spent a winter night in custody away from her children and she was coughing a lot on Saturday before the bail hearing but she managed to come to court today and she is in good health,” Nkwatshu said.

Gigaba was released on R5000 bail on Saturday.

#NormaGigaba has arrived at the Hatfield mag court where she faces charges of criminal injuria and malicious damage to property @SowetanLIVE pic.twitter.com/2rh2aYG2Pd

The matter was postponed and transferred to the Pretoria regional court on September 14 where a court date will be determined.

“She is being charged with malicious damage to property and crimen injuria. That is what the prosecutor brought forward. However, during the bail hearing we were told there is a charge of assault but it wasn't mentioned here this morning,” Nkwatshu said.

Gigaba, who was also represented by Adv Dali Mpofu and Adv Tembeka Ngcukaitobi appeared relaxed and unfazed as she entered the court yard.

The Sunday Times reported that, apart from allegedly damaging Gigaba's friend's car, the 40-year-old spent a night in jail because the Hawks wanted to clarify if there was a link to a previous death threat.

A source told the Sunday publication that a "threat" on Gigaba's life had been uncovered in June, and when Norma allegedly attacked the car two weeks ago in what other sources said was a "jealous rage", they used the opportunity to establish her involvement in the alleged conspiracy, if any.

Hawks spokesperson Brigadier Hangwani Mulaudzi told Sunday Times that there was "an element of threat to the former minister's life in the nature of the offence"."We had to get involved and deal with it. We have done what we had to do. That case now will be referred to the SAPS detective for further investigation," he said.

Why are the Hawks on Norma's case?

Norma Gigaba, this is a fight to win smart not violently

According to Wikipedia, "humiliation is the degradation of pride which creates shame or leads to a state of being humbled or reduced to lowliness or ...
Opinion
1 year ago
Next Article