Soldier 'kills man for a little argument' in Mpumalanga 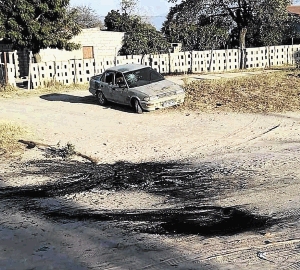 The car belonging to Molebatseng Centy Delebo who was shot and killed allegedly by an SANDF soldier at Chochocho village in Mpumalanga. / SUPPLIED

The girlfriend of a man who was shot and killed by a soldier has told of his last moments.

Molebatseng Centy Delebo, 37, was killed at Chochocho village in Bushbuckridge, Mpumalanga, on Saturday night when commotion broke out after police and soldiers were deployed to the area following reports of a mob justice incident.

Police said the incident happened at about 9pm.

Delebo's girlfriend, Ntombi Mlambo, who was among the three other people with him in the car, said her lover was shot three times.

"We had gone to get braai meat at the butchery but unfortunately we found that it was closed due to an attempted robbery that had just happened. Coincidentally, our car experienced mechanical problems, so we chilled while waiting for help," she said.

Mlambo said while they were waiting for a friend to come and help them, they realised that there was a mob manhandling a man.

"We couldn't get close because we had to mind the car. When we saw police arriving, we felt relieved but we did not know it was our last moment together," said Mlambo.

A military officer allegedly shot and killed a Bushbuckridge man during a commotion between police and community members.
News
1 year ago

She said a soldier came to them and demanded that they open the door. "He tried opening the driver's door but he couldn't because it does not open from outside. He then went to the back passenger door and opened it. He pulled me out and then two more soldiers arrived and started kicking me for no reason.

"The other man, my boyfriend's friend, then got out of the car and asked what was happening. At that moment I ran away. I then heard three gunshots. I heard screams and walked back and realised that my boyfriend was on the ground, next to the car and was covered in blood."

Mlambo, who is two months pregnant, said Delebo was shot in the back which showed he was trying to run to safety. The other bullets were in his neck and upper body.

National police spokesperson Brig Vish Naidoo said preliminary investigations revealed that the man alighted from his car and was allegedly holding a firearm. "He was shot and killed allegedly by an SANDF member."

Asked what the man was doing with the gun, Naidoo refused to give details, saying they would not be investigating the matter in the media.

He said the local rescue teams and pathologist were denied access to execute their duties when they arrived on the scene.

The family of the Alexandra man who was allegedly beaten to death by soldiers in front of police is seeking the suspension of those involved in his ...
News
1 year ago

"The community started burning tyres, causing chaos and throwing stones at the police as well as the SANDF members," said Naidoo, adding that a soldier was allegedly stabbed with a screwdriver in the finger.

He said after a while, the members managed to take control of the situation.

Naidoo said the crowd had badly assaulted the alleged thief before the arrival of the law enforcement officers. He was rescued by the police.

"Both firearms, a SANDF rifle and a handgun which the deceased civilian was allegedly carrying, have been taken in as exhibits and will be taken for forensic investigation."

However, Mlambo and Delebo's family denied that he owned a gun, saying police are fabricating the story.

"I have been with him since last year and I had never seen him with a gun. Even on the day, I did not see a gun in the car," Mlambo said.

She said Delebo was looking forward to being a father.

His brother Silven Delebo said the family was shattered.

"We want justice not excuses. My brother died at the hands of soldiers over a little argument. He had the right to ask what was happening but he got bullied and killed by a soldier when he was not a threat. He had no weapon and we hope the truth will come out one day.

"The police are talking nonsense, if you look at my brother's car, there's what looks like a bullet hole, so how then was he shot while he was outside the car with a gun?".

He said he felt the police were covering up for the soldier.

Delebo's friend Tumelo Mbomboshe said he had been robbed of his best friend. "I m angry and traumatised. He did not deserve to die."

The Khosa family is heading to the high court after their application for direct access to the Constitutional Court was dismissed on Friday.
News
1 year ago

The state, in the murder trial of a former SANDF soldier, says it is being held to ransom after sentencing was again postponed due to the accused's ...
News
1 year ago
Next Article